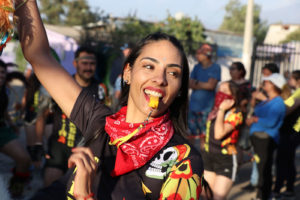 The 25th annual UN Conference of Parties (COP25) to the United Nations Framework Convention on Climate Change, was initially scheduled to take place in Santiago, Chile. However, a massive popular feminist and student uprising against neoliberalism, which started in Santiago, led the Chilean government to move COP25 to Spain.

Chilean popular movements announced that even tough COP25 moved to Spain, the peoples mobilization would continue. We decided to stand with the courageous Chilean social movements, who continue the resistance in the face of police repression and violence. We took to the streets, and we are took part in the Cumbre de los Pueblos and the Carpa de Mujeres, to build an alternative to the extractive systems of production and consumption, which have caused climate change.