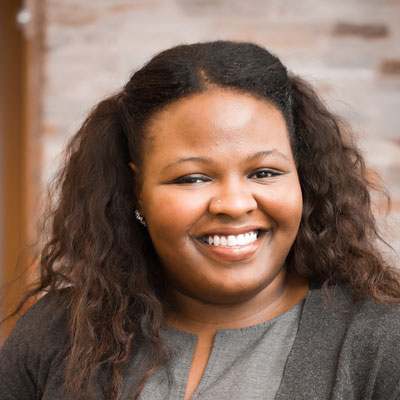 Monica Atkins began her journey with CJA as our Southeast Regional Organizer in 2017 through Cooperation Jackson. She then moved on to become CJA’s National Organizer and Co-Coordinator until finally in 2020 she became the Organizing Director & part of the organizations’ interim leadership structure. With the support of members, Monica has supported the Our Power Communities expansion from 7 to 34 active communities working toward a Just Transition and building regenerative economies through translocal organizing. She has also been critical to the success and operation of CJA’s Black Caucus organizing. Before joining CJA she was and continues to be an active member of Cooperation Jackson in Jackson, Mississippi and organized social and cultural events and actions including Art, Poetry, and Justice Slam; Freedom Summer March; and March on Mississippi For Workers’ Rights with artists and activists such as Common and Danny Glover. Monica also worked for several labor organizations including the United Auto Workers, American Federation of Teachers, and Communication Workers of America. She is a Chicago native and graduate of Jackson State University where she completed a Bachelor’s degree in English with an emphasis in Journalism. A poet and activist at heart, Monica’s passion for the arts has led her to organizing workers and communities through cultural organizing and base-building for more than 10 years.