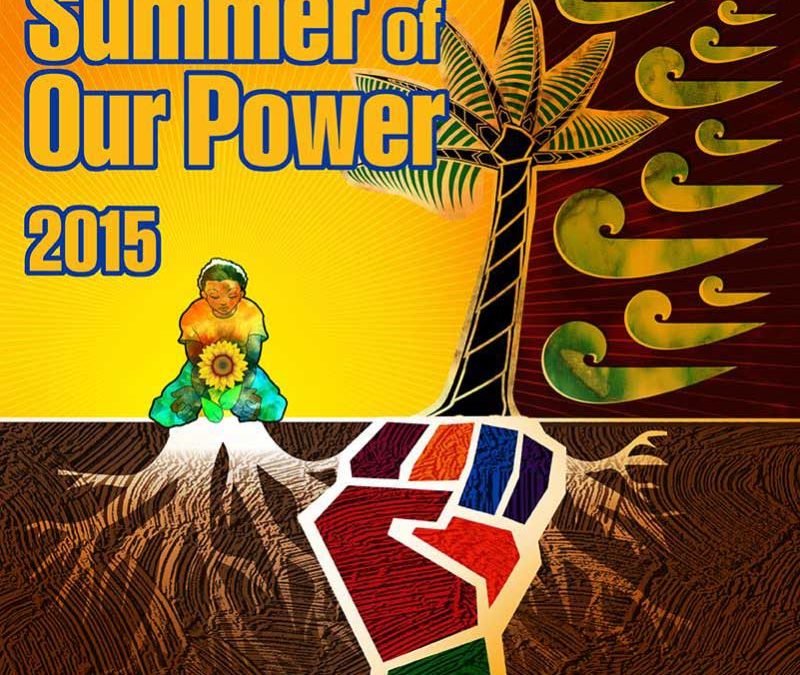 On June 21, 2015 the Our Power Campaign launched the Summer of Our Power, a two-month long event that highlighted the work of members of the Climate Justice Alliance on the ground. During the Summer of Our Power, CJA hosted a Just Transition fellowship program that supported 10 fellows and their organizations at different sites throughout the summer. Here are some profiles on the fellows, where they talk a little bit about themselves and what a just transition looks like in their communities.

To see the fellows talk about what a just transition looks like in their communities, visit the Our Power Youtube channel.

Laiseng Saechao was born and raised in Richmond, California and recently returned to her community after graduating from Scripps College, working with the Asian Pacific Environmental Network (APEN). Her impetus for becoming an organizer with APEN came from realizing during her time away that there was a gap in her own knowledge.

“I think a lot of what brought me to the work that I’m doing now is kind of a connection back to my community, back to my roots, back to what I want to be doing in the future. And having a history that doesn’t just include the one I’m learning in school, but the one that I get to learn from my parents, from the people that I live around, my neighbors. It’s a joint history,” she said.

For Lai, working for environmental justice was a way to connect different issues she was interested in, particularly ones affecting Richmond, which has a huge oil refinery and is impacted by industrialization. It has allowed her to organize around things she cares about, such as gentrification, jobs, access and health.

“I’d always thought about social justice, but I’d never thought of it in terms of the environment, or what environmental justice means, until I realized that you can’t really separate the environment from the people who are living in it,” she said.

Lai is a Climate Justice Alliance Just Transition fellow this summer with APEN.

To Lai, a just transition is not only about fighting the bad. It’s about creating a new world and giving people the chance to create a vision for themselves.

For the full interview of what a just transition in Richmond looks like to Lai, view here:

Otheree Christian is from Richmond, California. While he was recently introduced to Communities for a Better Environment through the fellowship program, he has been organizing as a community leader for a long time.

To Otheree, a just transition looks like changes in his community that create a better environment.

“A just transition is where change is being implemented and bringing about a better community. Making sure that we have good quality of air and making sure that … we have a good community environment,” he said.

Otheree is a CJA fellow who will be working with CBE this summer.

Andrew Campbell was born in Albany, New York and raised in Jackson, Mississippi. Nowadays, he attends Hinds Community College in Raymond, Mississippi and works with Cooperation Jackson on their urban farming co-op.

Andrew was able to learn and use some of his farming skills during an agriculture internship in South Dakota. Much of his inspiration for organizing came from Chokwe Lumumba, former mayor of Jackson.

“I was inspired by Chokwe Lumumba’s obtaining the mayor position here in Jackson, Mississippi, and also the work that he was trying to do on the grassroots level as far as just trying to change the economy,” he said.

For Andrew, much of the work being done with his organization is a “step forward for humanity.”

“I feel like a lot of things are done in redundancy and I think we’re kind of moving out of that,” he said.

In Jackson, Andrew says a just transition looks like revitalizing the city’s infrastructure in a sustainable and rejuvenating way.

For the full interview of what a just transition in Jackson looks like to Andrew, view here:

Shabrin Salam says getting involved in organizing “just kind of happened.” Her sister, who was an intern for East Michigan Environmental Action Council, suggested she go to a youth program at her organization. Shabrin went to a few meetings and decided to stay.

Shabrin has been with EMEAC for about four years now, and still tries to stay involved, despite being a student at the University of Michigan, an hour away.

In her community, Shabrin says a just transition looks like getting more of the community involved to combat big issues such as gentrification.

Shabrin says right now, one of EMEAC’s goals is to try to get more youth members involved in organizing.

“That’s one of the biggest objectives of EMEAC and trying to have them (the youth) do a lot of the working as well. So have them facilitate, have them lead, and basically train them to become the leaders they already are and to become better leaders,” she said.

Shabrin is a CJA fellow who will be working with EMEAC this summer.

Eric Harrison was born in Louisiana and started organizing after being recruited by the Gulf Coast Center for Law and Policy in high school. While he hasn’t been organizing that long in his current capacity, interning with GCCLP taught him about a lot of the issues facing his community.

“That led to me being aware of the problems and eventually wanting to do something about it so that’s how I became an organizer,” he said.

Eric says in his community a just transition looks like “democracy turning into what democracy is supposed to be.” The community would be led by and for the people, which would allow for a transition away from dirty energy and unemployment.

“A just transition in my community looks like everyone having a job that’s willing and wants to work. It looks like stopping the fracking that just got approved. It’s turning that money into opportunities for the frontline communities to have what they need instead of getting a couple people rich and keeping the money in the hands of a few,” he said.

Eric is a CJA fellow working this summer with the GCCLP. For the full interview of what a just transition in Louisiana looks like to Eric, view here:

Jessie Skaggs, Kentuckians for the Commonwealth

When Jessie Skaggs left to go to school in Louisville, she didn’t feel like there was much for her at home in eastern Kentucky. But after being away for about a decade, Jessie is happy to be back and organizing in the community where she grew up.

I ended up coming back home, and felt a real connection and appreciation for the area after being gone for so long. I’m really glad to be back home,” she said.

Jessie got into organizing after seeing a job listing with Kentuckians For The Commonwealth. After doing some research on KFTC, she realized the organization did work on all the issues she was passionate about in Kentucky.

“I got into organizing through my interest in sustainability. I was really interested in local food systems, sustainable agriculture, those kinds of issues and how it’s all interconnected,” she said.

For Jessie, a just transition looks like people in Kentucky getting rewarding jobs that are good for themselves and the community.

“The workers in an extractive industry, they’re not the problem. They also want to be able to feed their families and take care of their communities, they’re just trying to do that. And so a just transition to me means working together to create a brighter future while investing in the communities and workers that are affected by this transition,” she said.

Marilyn Duran has been working with People Organizing to Demand Environmental and Economic Rights (PODER) in San Francisco for almost half her life. From the Mission District, in her early teens Marilyn and her siblings started door knocking in her community to raise awareness about environmental issues that were disproportionately affecting people of color, such as toxins in the air from nearby freeways and facilities. She has pursued a deep passion ever since for pushing back on challenges facing her community, such as gentrification, housing and displacement.

“The range of issues has now shifted, but we’re still always disproportionately impacted. Especially in San Francisco, people of color are being displaced at rapid rates and that’s really a lot of what I focus on. I am proud to be able to stay in my community and that’s really one of the things that I focus on the most, because everyone has the right to stay in their community,” she said.

Marilyn comes from a framework of meeting folks where they’re at when reaching out to community members. Many are monolingual, Spanish-speaking immigrants, some of whom haven’t graduated college or high school. She believes in meeting them at the heart.

“That’s the way I like to live my life, the way I like to talk to people. The way I feel like our community comes together the most is through shared stories, shared relationships, communication at a level in which people don’t feel intimidated or condescended to,” she said.

Marilyn is a Climate Justice Alliance Just Transition fellow this summer with PODER.

Marilyn says PODER has several projects to help enable a just transition in the community. One is an urban farm that members created in the city. Another is a program called Bicis del Pueblo, in which people build their own bikes for transportation. The third is a business coop that allows the community to take back control of its resources.

“We’re just transitioning in those three ways and we’re really excited to get the process going,” she said.

For the full interview on what a just transition looks like to Marilyn, view here:

Arturo “Arty” Trejo is a first generation Xicanx–Mexican American–from El Paso, Texas. He has been living in San Antonio, Texas for the past four years and works with Southwest Worker’s Union on their environmental justice and climate change framework.

Arty was inspired to get into social justice by his mother, who he said faced injustices from being a mother, and mujer in a the economic crises. He said his father is also influential in much of what he does. He also chose to get into organizing to raise stories that wouldn’t necessarily be heard.

“As far as organizing, mostly being able to speak and help those narratives that are heavily invisible become visible through insecurities, vulnerabilities, motivation, encouragement, and envisionment,” he said.

When CJA asked Arty how a just transition is shaped, Arty responds, “it is the inclusion and validation of alternative economies. These economies include communities that are usually marginalized and most at risk for economic and social violence, such as people of color, womyn, LGBTQIA, and youth.”

“The alternative economies speak and reflect and validate our communities into not only regeneration, not only self-determination, but also self-validation. And that is a manifestation for justice and a demand for liberation,” he said.

Arty is a CJA fellow this summer with the Southwest Workers’ Union in San Antonio, Texas.