5 Reasons We Will Thrive After the Paris Accord Pull Out 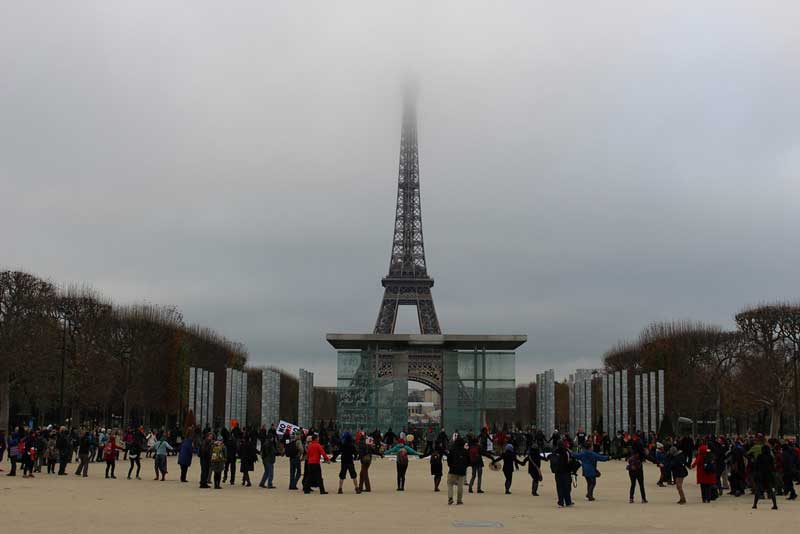 There’s been a lot of discussion and outrage over the past week about Trump’s decision to pull out of the Paris Accord. While the administration’s decision demonstrates its willingness to do literally nothing about the climate crisis facing us, the Paris agreement was not, and has never been, the solution we’ve needed. Here’s some reasons why we’ll be alright without it:

1. We Can and Must Do Better

Officially, the Paris Accord’s central goal is to limit global warming to “well below 2Â°C above pre-industrial levels.” This already isn’t enough for countries on the frontlines of climate change impacts, who asserted throughout COP21 that the goal would need to be below “1.5 to Stay Alive.” And in fact it’s even worse if you look at the actual content of the agreement, which would allow for closer to 3 or 4°C in rising temperatures. Temperatures rising this high would be catastrophic for everyone, and especially for countries in the Global South. Even with the Paris Accord still in play, we need to go above and beyond it to avert climate catastrophe and build climate resiliency in communities already being impacted. We have the tools and organizing power to do that, with or without Trump’s decision.

Local and state elected officials, such as the Climate Mayors, have declared they will support the Paris Accord despite the administration’s decision to leave. This is a step in the right direction, but local officials need to be consulting with frontline communities in order to make sure clean energy targets meet the needs of those most impacted which is necessary to help us truly address climate change. Transition plans from fossil fuels need to empower communities and do not have room for false options posing as clean energy, such as nuclear, large-scale hydro, fracking, natural gas and biofuels.

I was in Paris as part of the It Takes Roots delegation to COP21. During one of the orientations, I remember Dallas Goldtooth of the Indigenous Environmental Network recounting efforts to get the United Nations to include protection of Indigenous Rights in the enforceable text of the Paris Accord. The only mention of protecting Indigenous rights is in the preamble, making it aspirational, but not binding. In addition, some “solutions” acceptable within the Paris Accord take away sovereign rights from Indigenous people, such as the carbon offset program REDD.

Indigenous sovereignty is crucial to achieving climate justice. Indigenous peoples are among the first impacted by climate change and extractive fossil fuel projects. We’ve already seen through struggles such as those against the Dakota Access pipeline that Indigenous people are the ones leading important fights to protect our precious resources from the fossil fuel industry. They are also the ones protecting our planet’s biodiversity.

Indigenous groups are leading fights internationally, nationally, regionally and locally against extractive practices, and allies can do our part to stand with them in a way the Paris Accord didn’t. Follow groups such as the Indigenous Environmental Network, Indigenous Peoples Power Project, and more to support Indigenous-led work happening in your community.

3. We Have Real Solutions, Not Market Ones

This was one of the fundamental problems with COP21 from the get go. Corporations and their friendly government officials were major players in crafting the Paris Accord. The result was a lot of false solutions that don’t address the root cause of the climate crisis, which is a crisis of the economy. Carbon offset programs such as REDD allow states and corporations to continue to emit carbon as long as they plant trees somewhere else, usually resulting in the displacement of Indigenous communities. Carbon trading schemes enable emitters to continue polluting wherever they want as long as they have the money to purchase permits. The Paris agreement is full of these market solutions that allow corporations to continue to extract resources and labor, while poisoning communities.

Real solutions need to put an end to the extractive economy while fostering a Just Transition to locally-based, regenerative economies. Economies that not only give communities access to clean energy, but also democratic decision-making power over how this energy is produced and used. Economies that create meaningful jobs that give people control of their labor and provide a good standard of living. Economies that ensure we are not extracting resources or exploiting labor of the many for the sake of the few.

Many communities are already creating these real solutions by developing energy and food systems that are clean and locally controlled. The folks at Cooperation Jackson in Jackson, MS, which recently elected Chokwe Antar Lumumba to be mayor, are developing local cooperatives to give the community of Jackson control back over their food and land in a sustainable way. Organizers with Black Mesa Water Coalition have been working to build community-owned solar on Navajo Land. Solutions such as these, that give sustainable and democratic access of resources back to communities, are being developed across the country. They are what we need to fight these crises of the climate and economy.

4. We Are Standing in Solidarity with the Global South

Countries in the Global North, such as the United States, have profited for years off rampant emission of fossil fuels. Despite this, and despite the fact that countries in the Global South have been and will continue to be most impacted by climate change, the Paris Accord does not hold countries in the Global North accountable for the disproportionate responsibility they hold for the crisis. In fact, one reason Nicaragua refused to sign was because of this false claim around “universal responsibility.” It’s essential for people in countries such as the U.S. to stand in solidarity with communities of the Global South, who are paying the price for our country’s fossil fuel production and consumption.

Organizations and community members in the U.S. are already building real relationships with international movements. Many climate justice leaders have attended the Florestan Fernandes National School with the Landless Workers Movement in Brazil. Environmental Justice organizers have stood in solidarity with the people in Honduras following the assassination of Indigenous activist Berta Cáceres. Our movements can continue to strive to stand in solidarity with international movements and for more accountability from our government for its role in the climate crisis.

5. The Path to Climate Justice is Local

In the end, solutions need to come from those most impacted in order to achieve climate justice. People grounded in their own communities know what the communities need. That’s also the only way we can know the economies we create are not extracting from communities and workers. National and international agreements can support and fund these community efforts. They can even stand with and protect the rights of communities that are organizing for climate justice. The Paris Accord was never about doing these things. It was primarily created by and for corporate interests in the Global North.

Communities on the frontlines of extraction are doing work all over the country to craft real solutions that will not only reduce emissions, but will facilitate a Just Transition away from this extractive, fossil fuel economy. It’s not a good thing that Trump pulled out of the agreement, but I don’t believe that the Paris Accord could have solved the climate crisis. I do believe our communities will.

Here are some ways you can support a Just Transition outside of the Paris Accord: