The Indigenous Environmental Network and the Climate Justice Alliance effectively change the conversation around carbon pricing, with the launch of the report Carbon Pricing: A Critical Perspective for Community Resistance at COP23 in Bonn, Germany. 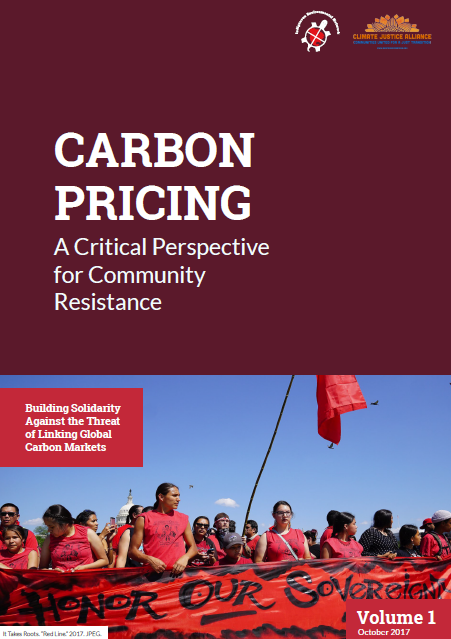 Carbon market systems will not mitigate climate change, will not advance adaptation strategies, will not serve the most vulnerable communities facing climate change impacts and only protect the fossil fuel industry and corporations from taking real climate action.

IEN, GAIA, Rising Tide and other founding CJA members have historically framed EJ opposition to false, corporate climate solutions. Starting with our opposition to a range of pollution trading initiatives (e.g. UN Clean Development Mechanism [the Kyoto Protocol’s carbon trading and offsets program], 2010 Waxman Markey Cap & Trade Bill and the California Global Warming Solutions Act) to fighting corporate climate technologies such as waste and biomass incinerator proposals, or CCS (Carbon Capture & Sequestration) projects on the ground, CJA members have played a leading role in raising global awarness around the risks and follies associated with such profiteering schemes, especially where these schemes have been generated by the same corporations causing climate change.

Some contributions worth noting include:
In summary, no pollution trading initiatives around the world have been able to demonstrate measurable efficacy in reducing emissions, and in most cases have served to perversely increase them while creating further problems with increased pollution and poverty among communities on the frontlines. This is the most recent report, produced by IEN and CJA, looking at the the various risks and threats created by carbon pricing measures currently in play, or being considered.
Download the report Carbon Pricing: A Critical Perspective for Community Resistance.