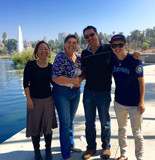 The staff and steering committee of the Climate Justice Alliance are excited to announce that Angela Adrar, will be joining CJA as Executive Director, pivotal in the Alliance’s commitment to expanding and amplifying the voice of Climate Justice communities across the Nation. Based out of Washington DC, Angela has worked at the intersection of agriculture, energy, and climate and will bring her collective leadership experience to compliment CJA’s already leader-full movement of over 40+ grassroots organizations.

Angela will be transitioning leadership from Michael Leon Guerrero, who will be moving into his role as Executive Director at the Labor Network For Sustainability, which is a member of CJA. Leon Guerrero has played a crucial role in fostering the development of CJA and the Our Power Campaign during the last two years, serving on the coordinating body of the People’s Climate March amongst other powerful campaigns during his time with CJA.

“Angela will bring a wide range of organizational skills and experience to her new position with CJA,” said Michael. “She is familiar with many of the existing CJA members, and will bring a leadership perspective to the alliance that will move it in an exciting direction. I am looking forward to see CJA and the Our Power Campaign strengthen and grow under her leadership.”

Angela, a Latina immigrant from Colombia who grew up in the United States, has been a leader and outspoken advocate for powerful and grounded social movements for decades – from legacy organizations such as the Rural Coalition, La Via Campesina North America, the US Food Sovereignty Alliance, and most recently as the Co-Chair of the Building Equity and Alignment for Impact (BEAI) Initiative. She looks forward to offering that expertise to the Our Power Campaign during an exciting time of strategic amplification and implementation.

At a National Convening in St. Louis this June, members of the Climate Justice Alliance ratified a 4-Year Strategy that will guide the alliance in moving towards a Just Transition for communities on the frontline of climate change which addresses issues of Energy Democracy and Food Sovereignty amongst others as critical pillars of our collective movement. As someone who has worked extensively with grassroots leadership, women, and with different sectors of the climate movement, Angela is well-suited to move CJA in a powerful direction that will center communities of color and poor white communities in the fight for climate justice while impacting national to international climate policy.

Angela has begun working with CJA staff and will transition into her role full-time starting September 1st. “Continued droughts, historical heat-waves, catastrophic flooding, and the acceleration of climate-related disasters demonstrate the importance of a proactive and unified climate justice movement that embraces a diversity of contributions.” she said. “Ultimately the leadership and solutions must come from the communities most impacted by the climate crisis for they will provide grounded solutions that will sustain us through a Just Transition forward for all. I am honored to take on this role.”

“This transition in leadership is happening during a critical point in time for the alliance,” Miya Yoshitani, executive director at Asian Pacific Environmental Network and co-chair of the Climate Justice Alliance steering committee, said. Now more than ever we need a powerful alliance of frontline communities fighting for climate justice and we welcome innovative leadership to help move our strategic objectives over the next four years. We are thrilled to bring Angela in to move our work forward.”