Franklin D. Roosevelt’s New Deal policy package is heralded as one of the farthest reaching accomplishments by a president in a generation. While there were many aspects of his New Deal that should be lauded, we can no longer ignore the fact that it deliberately excluded People of Color from enjoying its benefits while enacting policies that continue to harm those in Indian Country. The New Deal, in many ways, was responsible for the creation of frontline communities, which are treated as sacrifice zones via redlining and other discriminatory housing practices.

It is imperative that any Green New Deal agenda state these truths explicitly and make firm commitments to address and erase many of the discriminatory practices of the past in order to secure a regenerative economy that leaves no one behind.

Senator Sanders’ Green New Deal does just that by centering frontline communities, including Native Nations and tribal communities, with regulatory and financial mechanisms that could have immediate and long-lasting beneficial impacts if implemented.

In 2019, Climate Justice Alliance (CJA) expressed our concern that the Ocasio-Cortez/Markey Green New Deal resolution did not include “commit to omit” language associated with destructive schemes such as geoengineering, carbon markets, carbon offsets, and industrial carbon capture and storage. Senator Sanders’ plan is the first of the presidential candidate platforms to explicitly reject these false “solutions”.

Tom BK Goldtooth, Executive Director of the Indigenous Environmental Network and CJA Steering Committee Member, positively acknowledges this clear commitment stating, “false solutions disproportionately impact Indigenous communities here in the US and Canada, as well as globally. If we are serious about reversing the climate crisis, we have to be serious about how we’re going to do it, and false solutions like carbon pricing and offset regimes are neither serious nor realistic initiatives that cut emissions at source.”

Senator Sanders’ three-point Green New Deal approach includes holding the fossil fuel industry accountable for past harm and making it obsolete. CJA Policy Coordinator, Anthony Rogers-Wright remarked, “The climate crisis is a crisis of justice, and fossil fuel cartels are and have been at the heart of this crisis. For too long, they have enjoyed impunity for knowingly subjecting Black, Brown, and Indigenous peoples to disproportionate impacts that have cost lives and adversely impacted public health. From Cancer Alley in the Gulf South to the 48217 in Detroit, MI, it’s past time for the people to realize justice. Senator Sanders is to be applauded for understanding that mechanisms that restore Civil Rights Law are integral for an equitable Green New Deal.”

We are encouraged to see that Senator Sanders understands that a regenerative economy must be inclusive and accessible for all people. His financial commitments to a transition from investor-owned utilities to a 100% publicly owned model is a bold leap towards Energy Democracy, which will allow for local control of renewable energy production and distribution.

CJA understands that Transit Justice is Climate Justice. The Senator’s plan for huge investments in zero emission personal, public transit, and shipping vehicles, while also ensuring that public transportation is affordable, are steps in the right direction. Construction of a long overdue national high speed rail network is a welcome component of his GND that will vastly reduce emissions, and also create good paying union jobs in the process.

Rural communities and farmers, especially Black and tribal grassroots communities, have been neglected and left out of the discussion for far too long, even though they suffer some of the worst impacts of the climate crisis. Worse yet, these communities have been treated as non-entities by local and federal governments. Agriculture accounts for nearly 15% of national emissions when it could actually assist in the drawdown of greenhouse gasses in the atmosphere.. Senator Sanders’ call for a transformation from industrial agriculture to agroecology/regenerative practices will secure soil health, increase natural sequestration of greenhouse gas emissions, foster the production of healthy food, and protect farm workers from exposure to harmful pesticides. Offering financial protections for small family farms, which produce the majority of our food shows the Senator understands the harmful role that Big Ag plays in exacerbating the climate crisis and economic inequality.

During his 2016 presidential campaign, Senator Bernie Sanders released, arguably, the most comprehensive climate platform of all the candidates. His current proposal indicates that he continues to learn and understands the need to center frontline communities in any Green New Deal.

CJA Executive Director, Angela Adrar, summed up his proposal stating, “Climate change is a complex challenge and Senator Sanders’ GND offers multi-faceted solutions. We are looking for bold plans that directly benefit the frontlines, build on their wisdom and strategic efforts, and transform the economy to one that is regenerative in a way that leaves no one behind through a Just Transition. While there are some aspects of the plan that could be improved, the Senator’s GND is a solid foundation to build from and we look forward to working to ensure such a plan’s full potential is realized.” 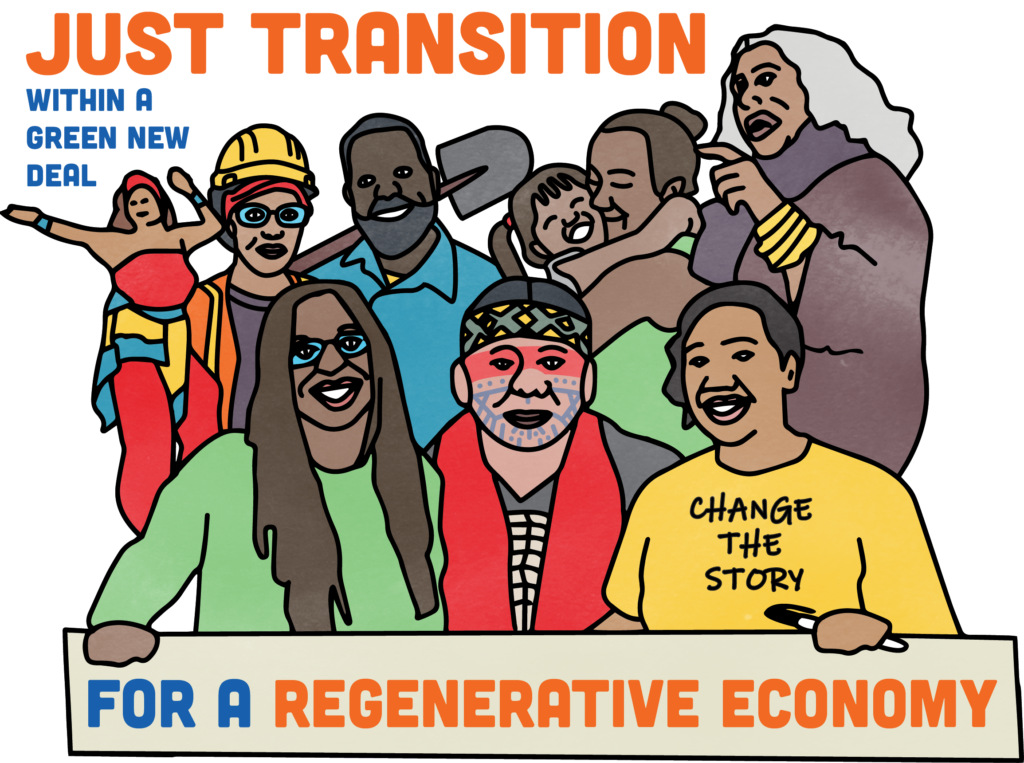