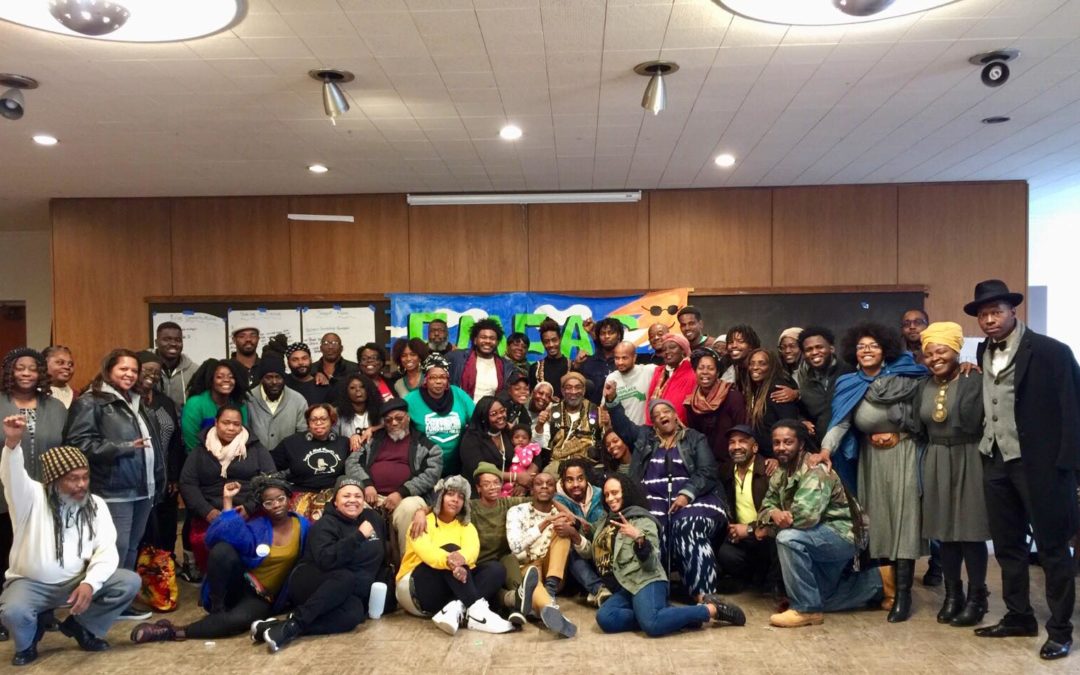 Last weekend, East Michigan Environmental Action Council  (EMEAC) and the Climate Justice Alliance (CJA)  gathered over 80 folks for a historic gathering to assemble and train fellow black organizers all over the country towards environmental justice and liberation!

For decades, Detroit has been home to some of the worst environmental injustices in the U.S., while also being a historic hub for visionary, black liberation struggles and organized resistance. Based on these historic traditions, EMEAC has been cultivating a movement for a Just Transition and decided to invite black leaders and delegates from all over the nation to participate in an historic moment to train, assemble and build new pathways towards justice, equality and freedom.

We started the convening in pre-assembly, where we invited 40 national and regional organizers to participate in a local Just Transition Tour hosted by our EMEAC/ Cass Corridor Commons family. The tour included visits to oil refineries, ports, metal recycling facilities and other sources that are linked to asthma, birth defects and cancer. Our fellow comrades and movement leaders were able to hear personal stories of local residents, like Emma Lockridge struggling to hold industry and government officials accountable for toxic pollution in their neighborhoods. 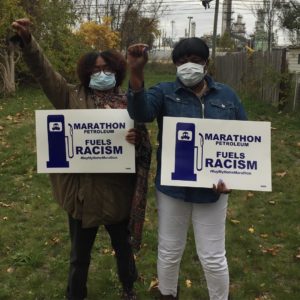 Our first stop was in the community of Southwest Detroit. A single Detroit ZIP code—48217—is surrounded by coal-burning power plants, tar sands refineries, steel factories, a salt mine, and a major interstate highway. And just like in too many other highly-polluted parts of the country, most of the neighborhood’s 8,200 residents are Black and low-income. 48217 is an infuriating example of environmental injustice in action. But for years, the people who live there have been fighting back. At the Black 2 Just Transition Assembly & Training, folks from all over the country had the opportunity to hear stories from some of the people who have been organizing for years on behalf of justice in Michigan’s most toxic ZIP code.

After the community toxic tour, we paid a visit to one of our communities Energy Democracy projects created by our comrades at Soulardarity. 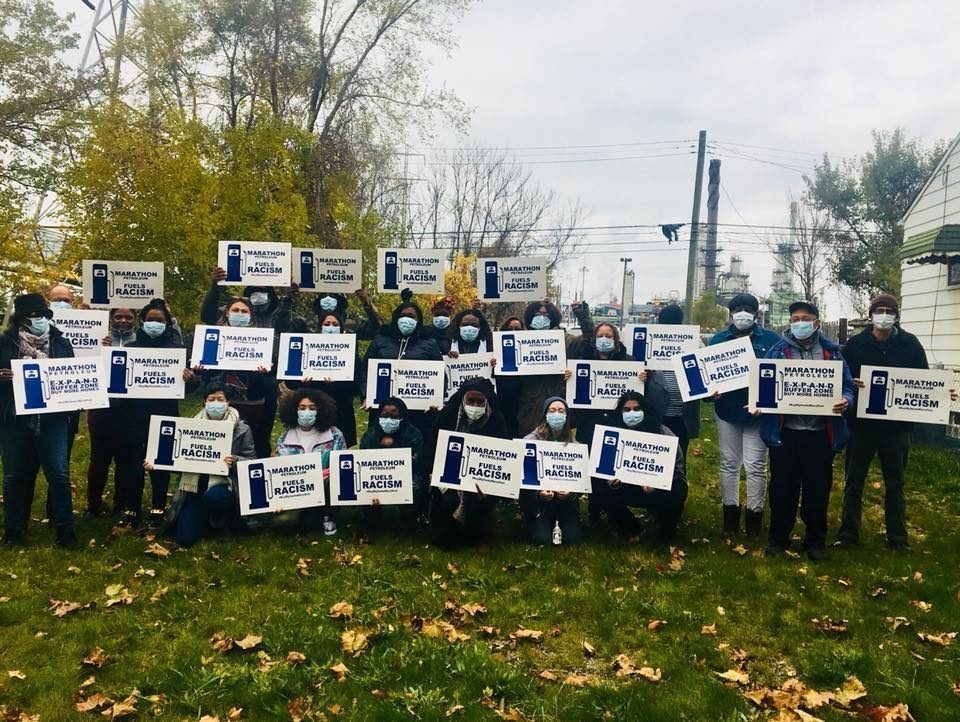 Energy Democracy is the idea that the people most impacted by energy decisions should have the greatest say in shaping them. The streetlight repossession in Highland Park is the result of an energy system that is impacting our planet, our health, our economic opportunities. The communities feeling most of the negative impacts – poor and working class people and people of color – have little means to shape the decisions in that system.

That’s why Soulardarity organizes all of their work around putting power in the hands of the people over the decisions that impact our lives. We envision a just energy future for all, one where energy is cooperatively owned and the wealth it generates is used to make communities stronger together, to create economic opportunities where they have been systematically diminished, and where our democratic institutions are serving the people to create a sustainable economy.

Community activist and Soulardarity Co-director Shamayim Harris, known as Shu, established the Jakobi park to commemorate the loss of her son, who was killed after being hit by a car nearly seven years ago. She sees the streetlight’s presence as transformative. 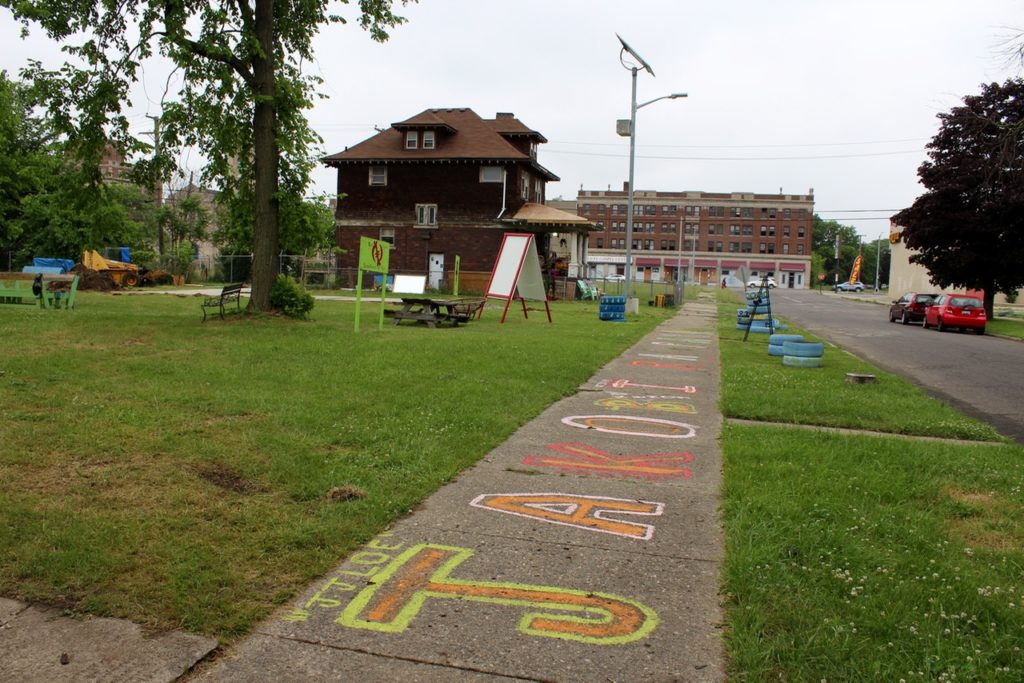 “For this particular neighborhood, it’s practical because people feel more safety and security, and it shows anyone can have a light in their neighborhood,” she says. “It shows we’re self-sufficient, and we can solve our own problems.”

As Shu suggests, the project’s vision extends beyond simple solar power. It points to community cooperatives as a method to manage utilities in financially-challenged cities, a third way beyond municipal control or privatization.

Lastly, we briefly toured a Food Justice and Food Sovereignty project in Detroit. The Capuchin Soup Kitchen Earthworks Urban Farm is a 2.5 acre certified organic farm located in the City of Detroit. We seek to build a just, beautiful food system through education, inspiration, and community development. As a working study in both social justice and in knowing the origins of the food we eat, Earthworks strives to restore our connection to the environment and community. 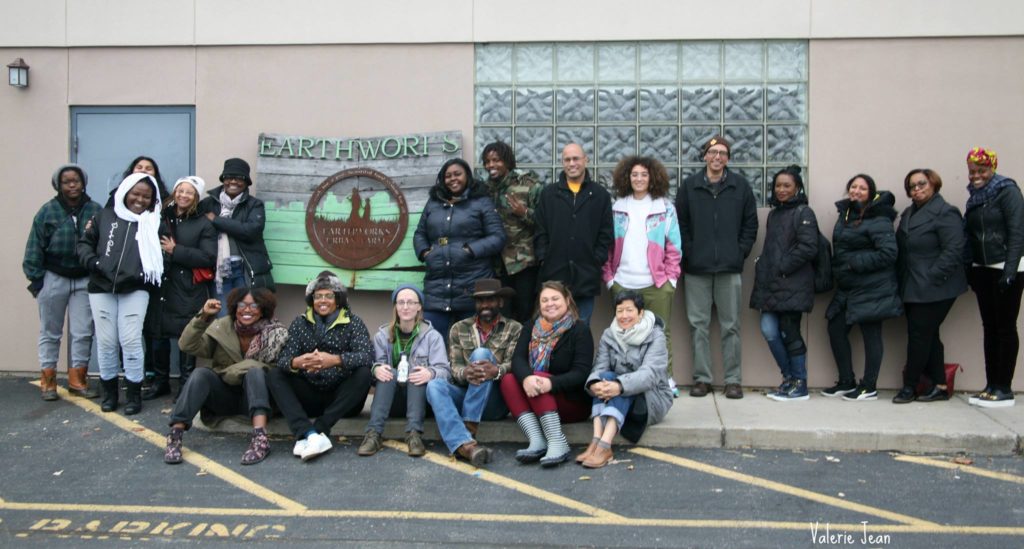 Detroit has been described as an urban healthy food desert for almost a decade now. A widely cited study of the Detroit found that poor black neighborhoods were on average 1.1 miles farther from supermarkets than poor neighborhoods with a low percentage of black residents. Detroit is also a city with vibrant food justice movements centered around issues of healthful food and social justice, which further enhances our utility as a model food system. The food justice movement is a combination of growing and consuming healthful food sustainably with an interest in achieving racial, economic and social justice. There are more than 1,500 farms in the city according to Keep Growing Detroit.

Before the Assembly & Training began, we held a local grounding and indigenous ceremony with Golden Eagle Woman (also known as Chantel Henry) to honor the land and the Anishinaabe people of the Great Lakes region, Detroit. We started our Assembly & Training acknowledging that we needed to honor our brothers, sisters and two-spirited folks who have paved the way and honor our ancestors we’ve also lost along the way. 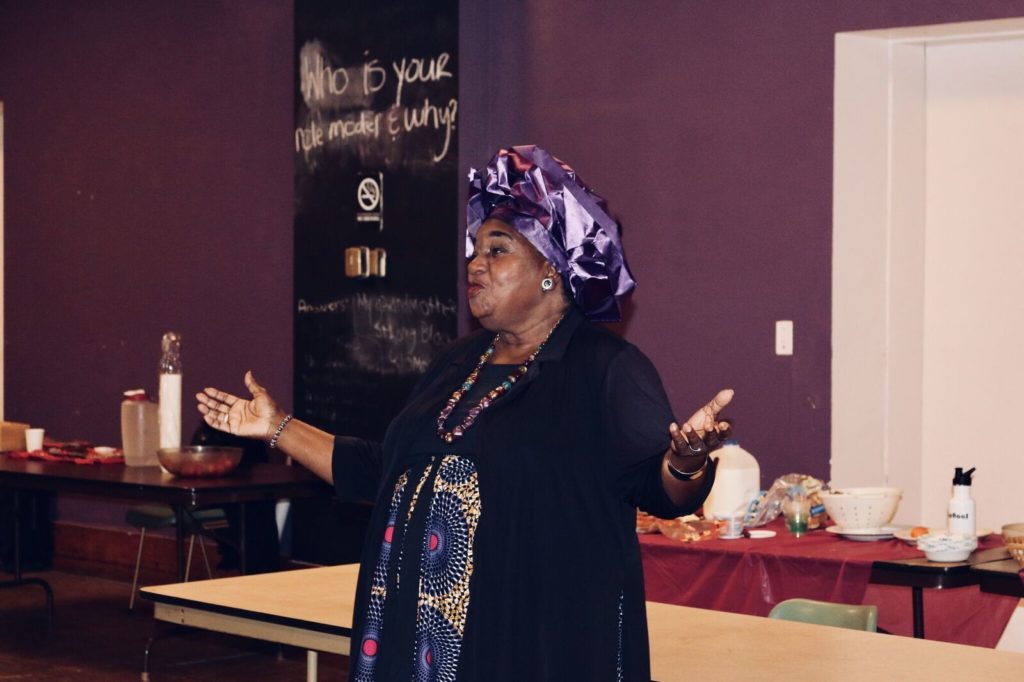 Each day of our Assembly & Training started with spiritual grounding and prayers rooted in the Pan- African, Ancestral and/ or the Black Christian experience.

Our Cass Corridor Community, Mama JoAnn is a native Detroiter, and has been honored as a “Distinguished Alumnus” of the University of Michigan. She served on Detroit City Council for 10 years and was recognized by The Nation Magazine in 2009 as “the most valuable local elected official in the USA.” She was formerly: Detroit City Council Member, Detroit NAACP Director, Detroit YWCA Director, YWCA of the USA Assistant Executive Director and Public Liaison for the former Dean of the Congressional Black Caucus, Congressman John Conyers. Mama JoAnn also served as a delegate to the 2001 U. N. World Conference Against Racism in Durban, South Africa & the 1989 Women for A Meaningful Summit in Russia.

The Welcome to Detroit Panel 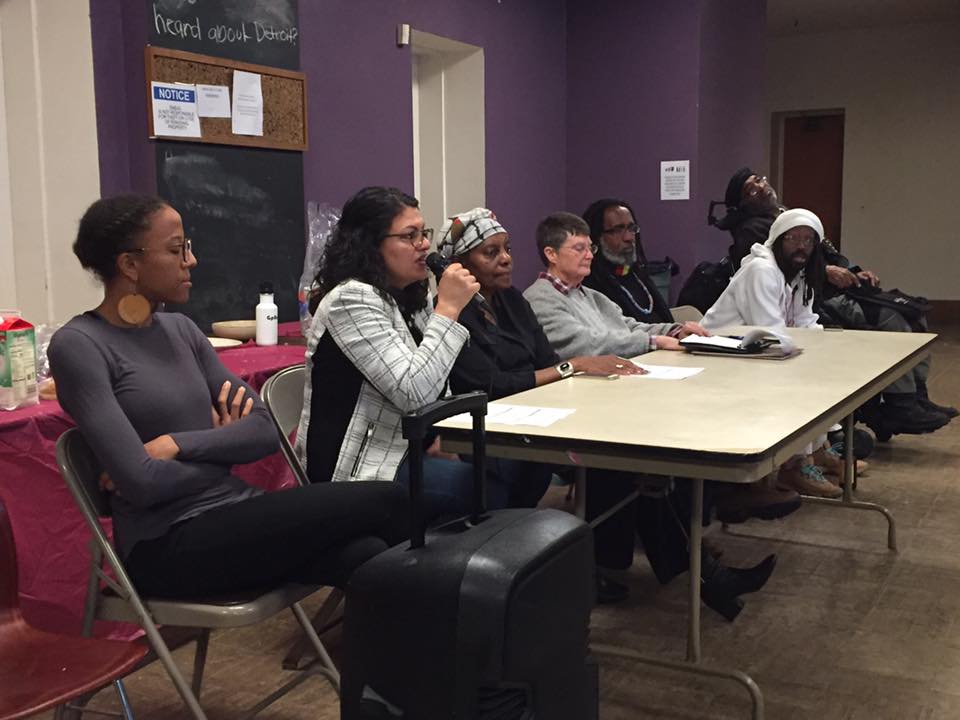 There are numerous struggles within Detroit’s Environmental Justice (EJ) landscape. Our communities face sickness by the dozens, hundreds, or thousands as we struggle to obtain even the most basic of human rights.  Welcome to Detroit!

Our panelists told the narrative of how Detroit held the “promise” of the good life for working class Black folks. Thousands of ancestors and elders fled terrorism in the South and in Detroit were able to make more money than ever before in and near the auto industry. The automobile industry in Detroit “promised” a life to Black people that no other industry or place had presented in that time. Our panelist gave an introduction to the history of Detroit and the various movements happening to make the just transition real on the ground.

Sacrifice Zone refers to Detroiters who have been redlined into areas surrounded by industrial pollution, provided little to no medical care or access, denied access to healthy food options and quite often watch friends and neighbors suffer or die from preventable health issues as well.

The same conditions that brought about the promised land– massive opportunities in the industrial sectors-are now what make it a sacrifice zone- environmental domination by polluting industrial facilities. Check out our Environmental Justice Report here, written by William Copeland and Dorthea Thomas. 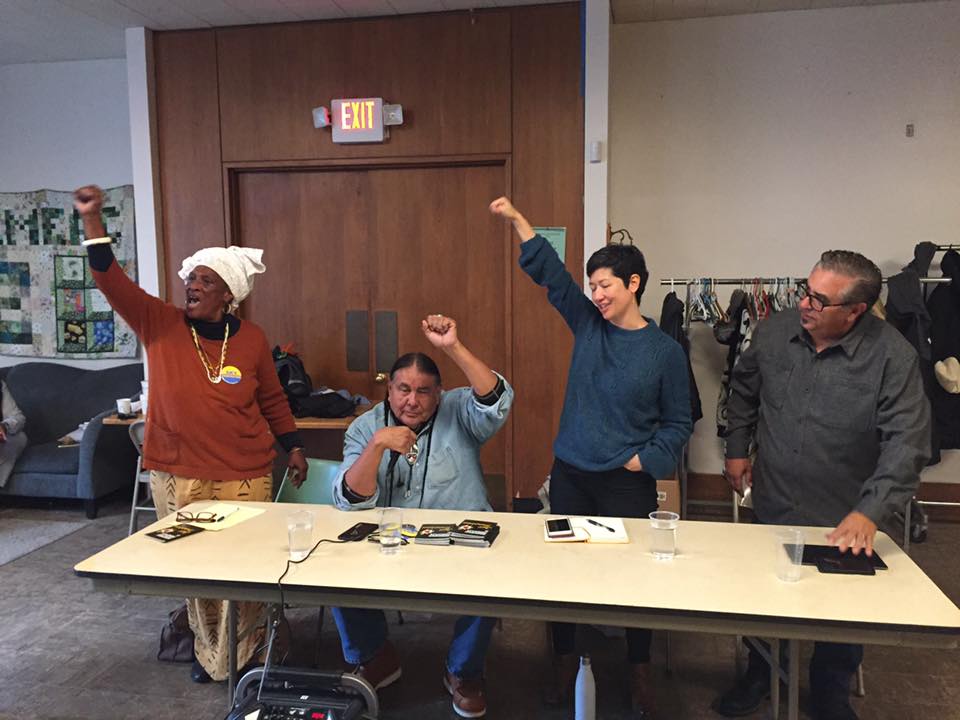 Our first day was centered around learning our history. We continued our program with another strong panel that grounded us in political education and multicultural community-building, where we learned how people of color came together to create a Just Transition from toxic-related industries and policies to sustainable, regenerative industries and policies that protect the health of environmental justice communities across racial-lines, sectors, demographics and regions.

Growing Our Movement Panel – “The Present” 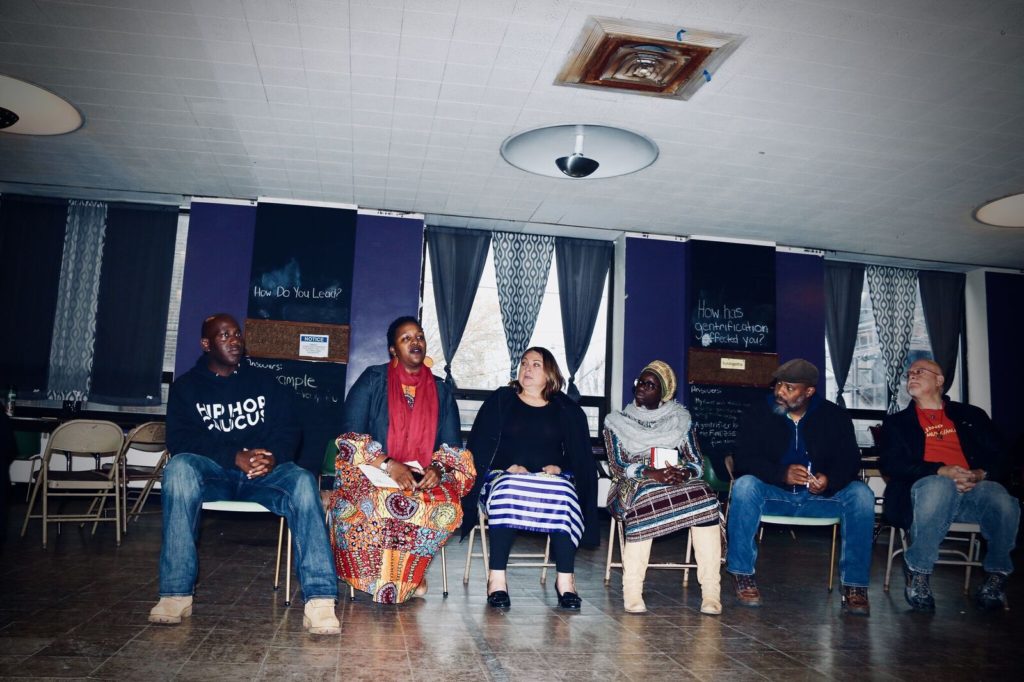 Our Black Liberation keynote speaker Kali Akuno joined the “Growing our Movement” panel discussion as we learned lessons on how to desilo our movement. Our speakers shared their backgrounds, the work they do with their organization and strategies used to desilo the work and create a bigger united front. This panel was an an overview from our current movement leaders in the region and across the nation that are all working in solidarity to desilo, create intergenerational spaces and practicing self-governance to make Just Transition real on the ground. 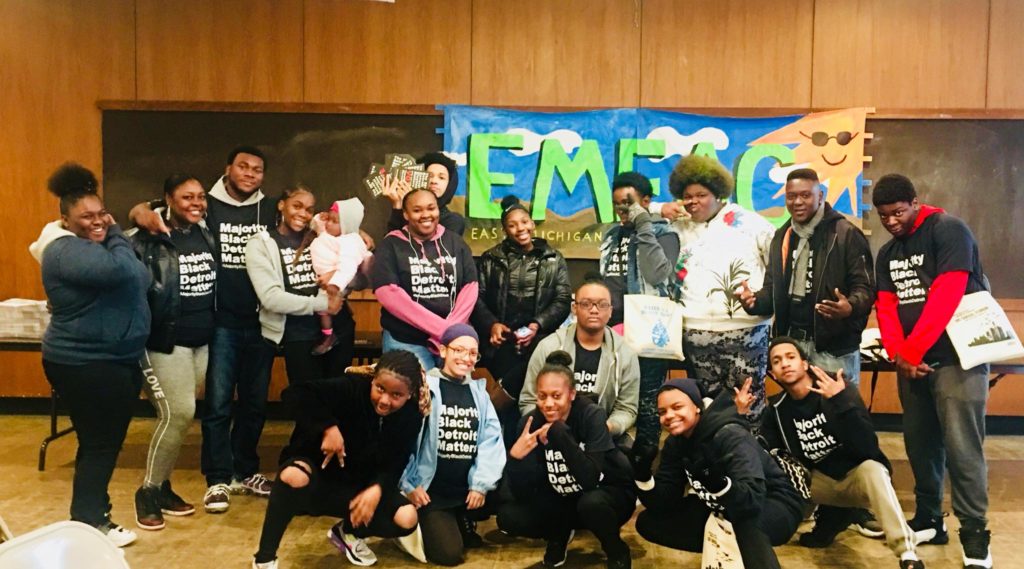 With all of the healing, art, and culture, the most inspirational part of the Assembly was being able to see a historical movement carry on to the next generation of our Cass Commons family. Our EMEAC Energy Democracy Youth Squad created their own space to practice what a just transition looks like on the ground for their own futures. Our team of youth hosted, led and self-organized 2 amazing workshops and ended the Assembly & Training with their own intergenerational & cultural party. 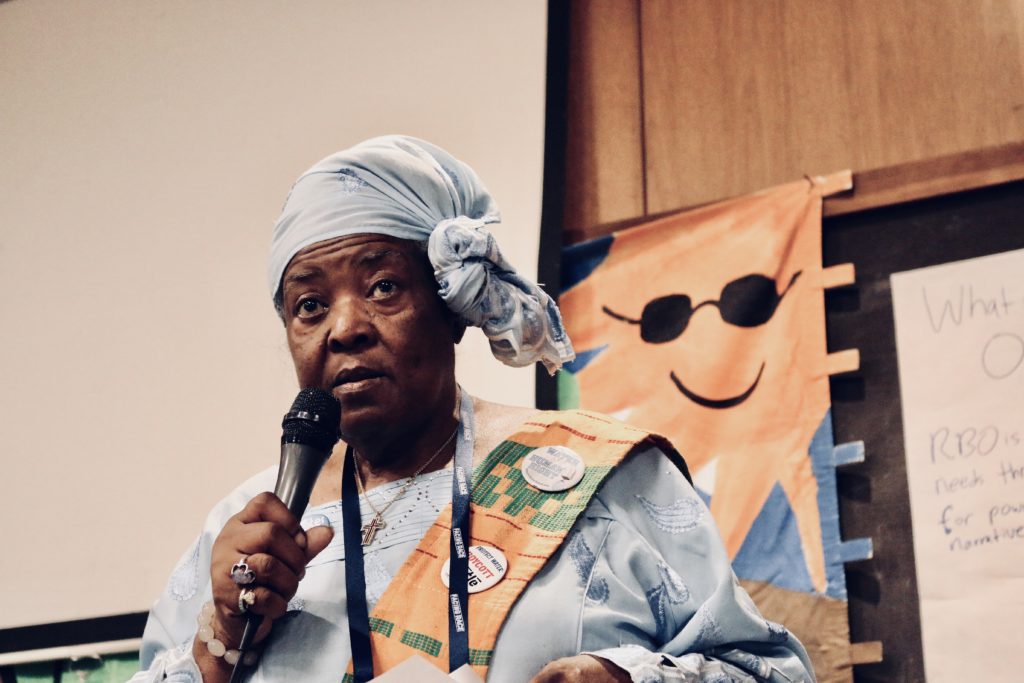 Also, we had workshops on Structural Racism and Community Organizing with Mama Lila from the Rosa Parks Institute. Lila Cabbil was raised in Detroit and was one of Rosa Parks best friends. She even had the honor of working personally with Rosa Parks as the program director in the Rosa and Raymond Parks Institute. Mama Lila has worked in the tradition of Mrs. Parks for over 40 years, and is now President Emeritus of the Institute. Mama Lila has worked on racial justice, environmental justice and food justice for decades in Detroit, and reminded us that on that fateful day on the bus so long ago, Rosa Parks always corrected the story to say “that she wasn’t tired, she was tired of the way she was being treated.”

In addition, our partners from Movement Generation, Deseree & Quentin also trained folks on Resilience Based Organizing & Translocal Organizing along with Just Transition from a Black Liberation lens. Also, we had other workshops in the space centered around: Just Transition Finance with Jacqui Patterson from NAACP, Just Transition for Water Justice & Equity with Sylvia from People’s Water Board, and Energy Democracy with Michelle Martinez from Michigan Environmental Justice Coalition and Denise Abdul-Rahman from NAACP Indiana State Conference.

Our keynote speaker Jose Bravo from the Just Transition Alliance introduced us to the analysis, framework and history of the just transition methodology. In his presentation, we learned how to build a regional/local economy model that is concerned with its population and an economy and that is guided by laws which will require industry and corporations to move towards cleaner methods of production. We touched on ideals on how we can achieve this by transitioning away from unsustainable methods that only exacerbate the disproportionate impact that dirty energy and toxic chemicals have on communities of color and low-income communities. 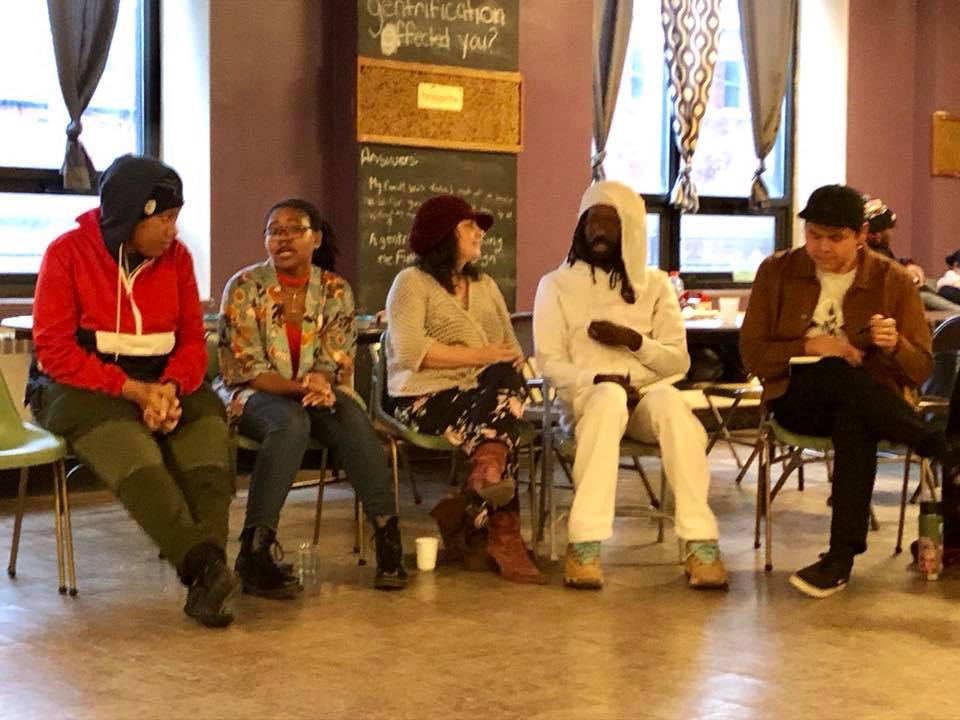 We started our Healing Circle and Assembly with a panel discussion on “Defining Healing Justice and Decolonizing Health & Healing: A report from US Social Forum in Detroit, Atlanta and Beyond”  This space provided an intergenerational framework of the healing justice movement and the work happening to make a just transition real on the ground locally. We talked about our backgrounds, our work and how we got into healing justice and movement building work. In this conversation, we identified ways we could create principles, develop reports and be intentional with creating healing space in all movement spaces that center black liberation and/or environmental justice to build a more sustainable, generative movement. 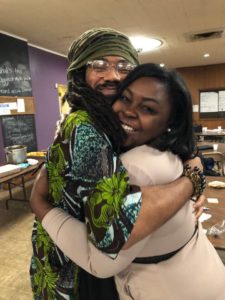 Special thanks to the It Takes Roots Black Delegates that contributed to this space and worked tirelessly to use the local tour, groundings, trainings, workshops and assemblies as a foundation to build a stronger, bigger and greater alliance with black leadership representation. We appreciate and value your diligent hard work! We can’t wait to see what’s next.