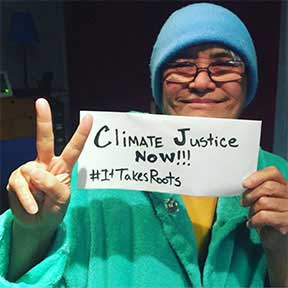 On November 29th millions of people across the planet will take to the streets on the eve of the UN Climate Talks in Paris to demand bold, urgent action on the climate crisis. Whether you’re able to join in the streets, or if you… just want to support from home, we need your voice. Send your photo and message today and join the virtual march! The Climate Justice Alliance will be a part of the It Takes Roots delegation to Paris to demand bold action on climate change. The climate crisis is already having severe impacts on some of the most vulnerable communities on the planet, and it threatens the very existence of the human species. To support this massive mobilization the People’s Climate Movement is hosting a virtual climate march where thousands will send in photos or messages about why they want action on climate to make sure world leaders hear us.