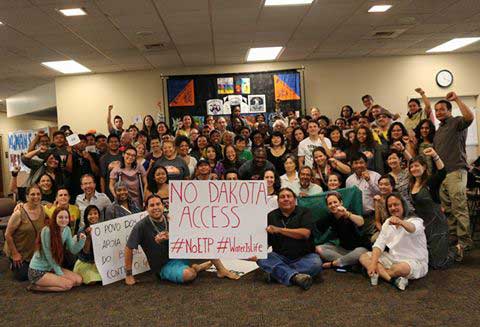 Dear AFL-CIO President Trumka and Our Sisters & Brothers in the Labor Movement:

In 2013, on the eve of the AFL-CIO convention we wrote a letter to you calling for a dialogue between environmental justice organizations and the AFL-CIO. Although our communications never resulted in a meeting, in light of the current situation regarding the Dakota Access Pipeline (DAPL) the reasons for our request are just as urgent and relevant as ever.

The Climate Justice Alliance (CJA) represents 40 organizations with thousands of members throughout the U.S. led by Indigenous communities, communities of color and low-income white communities living on the frontlines of the impacts of extractive industries. We see ourselves as part of a growing global movement to fight climate change and build a sustainable future for the planet and its people. We believe that Labor must play a key role in this movement if it is to continue to represent the aspirations of working people, both on the job and beyond. At the same time, the environmental justice movement cannot halt climate change without organized labor. We need each other to win. Right now, none of us are winning

CJA is asking the AFL-CIO to reconsider your position on DAPL. According to CJA member Indigenous Environmental Network’s website: This pipeline will carry over a half a million barrels of oil per day from the Bakken Oil Shale Fields. The route the pipeline will take, if approved, will be laid under multiple bodies of water, to include the Missouri River located a half mile upstream from the Standing Rock reservation. This river not only supplies drinking water to the tribe but is a major tributary to the Mississippi River where more than 10 million people depend on it for both human consumption and irrigation for the nation’s “bread basket.”

The AFL-CIO statement says that:

We believe that community involvement in decisions about constructing and locating pipelines is important and necessary, particularly in sensitive situations like those involving places of significance to Native Americans. However, once these processes have been completed, it is fundamentally unfair to hold union members’ livelihoods and their families’ financial security hostage to endless delay.

In fact public processes have not been completed. This is evidenced by the order of a Washington federal appeals court to stop construction while the court considers whether to order a longer delay. The Army Corps of Engineers has also said that it will not allow construction on federal lands while it considers permits for sections of the project. The Standing Rock Sioux Tribe is using strategies and tactics that workers and unions have historically used effectively – exercising every legal and administrative right available to them and utilizing direct action and civil disobedience as tactics to protect their sacred sites, health and environment.

There are many reasons why the Dakota Access pipeline is a bad project, not just for the Standing Rock Sioux nation and the people who live on the land around it, but for everyone. It takes away the right for people to govern our own energy. It poisons precious resources and perpetuates the biggest crisis of our existence — climate change. Temperatures are continuing to rise and are causing more and more global warming-related disasters everywhere, from the flooding in Louisiana to the fires in California and to the heat waves in the northeast. We all have a stake in supporting communities who are standing up to projects like Dakota Access. We don’t need more pipelines, we need a just transition to clean, sustainable, and democratically-controlled energy.

We understand the concerns of the hundreds of workers who are in need of work to sustain their families and livelihoods and are now employed constructing the pipeline. We are also aware of the history of failures of previous Just Transition efforts that have left workers hanging. The communities we represent are plagued with above average rates of long-term unemployment and low-paying jobs. We are often the last hired and the first fired in development projects. We have also experienced our share of false promises by government and industry.

But this is a moment that requires us to not be guided by past failures or betrayals. It requires us to be bold in our demands and strategies and to build a broad-based movement that will not accept that jobs vs. the environment is an inevitable conflict.

We believe that there are many projects and policies that we can mutually support that will create millions of good paying jobs and that will contribute to the well-being of our communities and the planet. The crisis in Flint, MI demonstrated the urgent need for new water infrastructure, particularly in low-income communities of color. There are similar needs in housing and an opportunity to construct energy efficient homes and commercial buildings. There is work in developing Zero Waste programs – and the City of San Francisco has demonstrated that waste reduction programs can create good-paying union jobs. We can support demands that renewable energy projects require good paying, union jobs as well. We can demand that government provide a “Superfund for Workers” that provides unemployment insurance, health care, pensions, job training and living expenses for workers transitioning out of fossil fuel industries.

As the climate and economic crises continue to impact the communities we come from and really care about, this issue/wedge is not going to go away, only intensify. Therefore we are renewing our request to engage in a proactive dialogue. We request a meeting with you to discuss our concerns and potential opportunities to work together for a clean energy future that addresses the needs of current workers and the many in our communities who are under and unemployed. We also urge you to meet with the Standing Rock tribe and other communities that are being impacted by the pipeline.

It is a difficult to find ourselves in disagreement with the AFL-CIO on this issue. We believe that organizing for the rights of workers is a fundamental, inalienable right and an absolute necessity in an era where corporate power is at its zenith. And we ask you to understand that many people stand to suffer direct impacts from DAPL and millions more will experience the repercussions if the project and many others like it are allowed to go online. The Standing Rock tribe is fighting to protect their health, sovereignty and sacred sites. CJA, 200 indigenous nations, 1200 archeologists and museum directors and many other organizations are standing with them. We are also heartened that four AFL-CIO affiliated unions and the constituency organizations within the AFL-CIO have expressed their support for Standing Rock. We urge you to do the same.