Miami — Today, Climate Justice Alliance (CJA) congratulated Governor Jay Inslee on his just-released plan “Freedom from Fossil Fuels,” as this plan will keep climate change at the forefront of presidential debates and the overall discussion on this quintessential issue. CJA is pleased to see a climate plan that centers frontline communities who are already experiencing the worst impacts of climate change and fossil fuel extraction, as well as workers who cannot be left behind as we transition to a regenerative economy.

CJA’s Executive Director, Angela Adrar, who met with Gov. Inslee today directly after his plan was released, remarked, “Gov. Jay Inslee’s platform shows that he understands the importance of no longer treating the frontlines and communities of color as sacrifice zones, nor subjecting them to extractive practices and exploitation.” 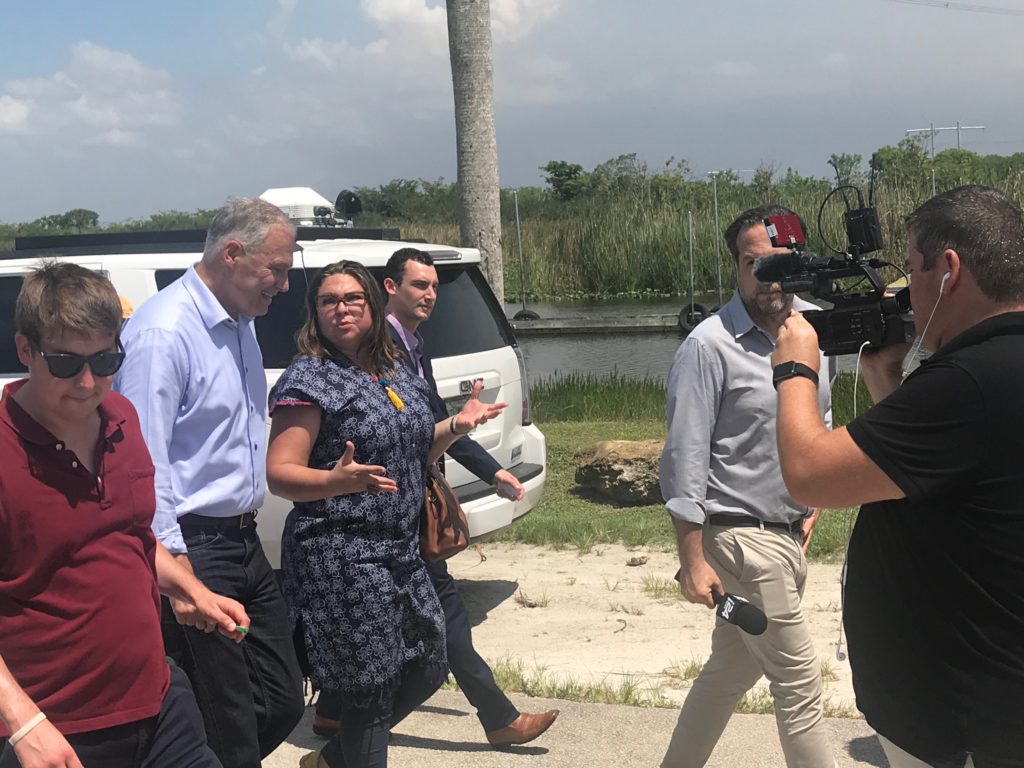 From the start, Governor Inslee’s is among the first to showcase the need for justice and restitution for communities targeted historically by the fossil fuel industry for their dirty and harmful practices. Creating an Environmental Justice division in the Department of Justice would be a powerful tool that better allows for communities to protect themselves and receive restitution for historic and future harm.

As Adrar put it, “Polluters must be held accountable for current and past harms. At the same time, we must ensure that we anticipate the response of the fossil fuel industry who are likely already looking for loopholes in the Governor’s platform. I shared with Governor Inslee the need to ensure his plan closes the book on loopholes such as tax credits for unproven and false solutions like industrial carbon capture, storage and sequestration.”

The plan’s goal of establishing a dedicated “RePower Fund” will serve two purposes, holding fossil fuel companies accountable for historic harm to frontline communities and the creation of jobs for local workers in communities that have been traditionally targeted and treated as sacrifice zones through extractive practices like mining, drilling and fracking. The plan’s intentional and explicit commitment to including tribal governments would be formidable, especially if done in  conjunction with the Restoration Fund.

According to CJA member organization, the Indigenous Environmental Network, “With further bold action, Governor Inslee’s plan lays out proposals for tribal nation inclusion, by ‘directing federal agencies to fully empower tribal nations, through free, prior and informed consent, and the enforcement of treaty rights, to reject major infrastructure proposals that would adversely impact their people, land, water, or cultural resources. And requiring all federal environmental review and permitting processes to involve thorough consultation with and input from local communities.’” Read IEN’s full statement here.

Adrar concluded, “This platform puts us on the pathway to a regenerative economy, it redirects fossil fuel subsidies to work for solutions that are real. it creates an EJ office within the Department of Justice to seek litigation for historical harm and assure that there are funds in place for to Repower and Restore communities and the Eco-system with workers and frontlines  at its core.” It’s radical, bold and unapologetically rooted in climate justice. Governor Inslee has set a new standard for climate platforms and everyone running for office in 2020 should be paying attention.

The Climate Justice Alliance is a growing member alliance of 67 urban and rural frontline communities, organizations and supporting networks in the climate justice movement. CJA is dedicated to building Just Transition away from extractive systems of production, consumption and political oppression, and towards resilient, regenerative and equitable economies.