Biden’s Direct Air Capture Push is Dangerous for Us All

Direct Air Capture (DAC) is an unproven technology that allows fossil fuel extraction and use to continue, resulting in ongoing harm to frontline communities. Thursday’s announcement from the Biden Administration and the Department of Energy (DOE) to invest $3.5 billion in DAC hubs is a dangerous gamble that puts frontline communities at further risk, when climate chaos is deepening and we need to ensure the swift and just transition to renewable and regenerative solutions.

As we have previously pointed out, “The current proposed technique would use large fans to move air through a filter, where it passes through a chemical adsorbent to produce a pure CO2 stream that could be stored. To have any significant effect on global CO2 concentrations, DAC would have to be rolled out on a vast scale, demanding very large amounts of water and energy, and raising environmental justice concerns about the toxic impacts of the chemical absorbents used in the process.”

“It is undeniably true that the mere promise of DAC technologies acts as cover for continuing fossil fuel extraction and use, resulting in continued harm to frontline communities. It is also a dangerous gamble, since we are already in the midst of a severe climate crisis, and the promise of DAC may never materialize and only harm frontline communities in new, unacceptable ways.” – Basav Sen, Institute for Policy Studies

More than 500 organizations, including Climate Justice Alliance, have called for an end to carbon capture strategies (CCS) like DAC. Yet billions of taxpayer dollars are now being pledged to it and other carbon capture techno-fixes, along with philanthropic dollars, that could instead be used for real and proven renewable energies in frontline communities. Frontline-led Just Transition projects such as the first local solar coop in New York, that benefits community members and small businesses, is one such example that advances solutions needed to cool the planet and ensure ongoing harm to frontline communities comes to an end.

“As the Carbon Capture & Storage: A Clear and Present Danger report, plainly and emphatically demonstrates, CCS infrastructure is a clear and present danger to the health and safety of our communities and environment, that are already overburdened. Investing billions in DAC shows us that the Biden administration is not committed to removing gas, oil, coal, and other fossil fuel infrastructure, like the Chevron refinery here in Richmond, CA, that has been killing us for decades. We need proven, clean renewable energy solutions such as community controlled and led solar, wind and others that are accountable to frontline communities – not band aids for the worst polluters to continue business and usual.” – Najari Smith, Rich City Rides

While the DOE press release says it will “emphasize environmental justice, community engagement, consent-based siting, equity and workforce development, and domestic supply chains and manufacturing,” as the entire history of the fossil fuel industry has demonstrated, this is an afterthought and a band-aid to a broken and dirty energy system that puts profits rather than the well-being of people and planet at the center.

“Carbon Capture is a greenwashed solution and it will have colossal impacts on the same environmental justice communities that the Biden administration claims it will help ‘improve’. New Mexico has been a guinea pig for many of these false solution programs, but what we need are publicly owned renewables such as wind and solar. New Mexico can no longer sacrifice its sacred air, land, and water, especially in the midst of severe aridification and climate catastrophe. Our state is currently facing extreme wildfires, permanent drought effects, and other air quality issues linked to the legacy of the fossil fuel industry, which threaten our ecological health and cultural lifeways.” – Alejandría Lyons, SouthWest Organizing Project

“What about the other gasses and pollutants that will continue to harm nearby communities if these industries continue to go unchecked? The dangers to our communities are systematically overlooked, even as the Biden administration promises to deliver investment benefits to environmental justice communities through its Justice 40 Initiative. Transporting and storing carbon dioxide (CO2) will involve massive networks of pipes and underground storage, that dramatically increase the risk of seismic activity as well as ruptures and leaks hazardous for humans, animals, and drinking water. Many of our communities currently don’t have access to clean drinking water – where is the investment to replace all the toxic lead service lines around the nation? Government investments must be accountable to our communities and support a transition away from fossil fuels into renewables that will benefit us all.” – Juan Jhong Chung, Michigan Environmental Justice Coalition

“EMEAC builds and believes in grassroots, frontline community power. We root ourselves in processes of building community power working in solidarity with organizations and activists from all over the country around the simple affirmation that only the communities who face climate destruction and environmental justice can build a just future. We reject false promises and the top down thinking that produces them; we call on the Administration to invest in the transformative power of community solutions for protecting our air, water, land, and our communities.” – Paul Jackson, Co-Director, East Michigan Environmental Action Council (EMEAC)

The letter we sent along with 1,140 other organizations and as a part of the formerly Build Back Fossil Free Campaign, now called the People vs Fossil Fuels Coalition, in February still stands. We call on President Biden to recall the DOE’s Notice of Intent (NOI) to fund DAC and move the use his Executive powers to immediately 1) ban all new oil and gas contracts on federal areas, 2) stop approving fossil fuel projects, and 3) declare a climate emergency under the National Emergencies Act that will unlock special powers to fast track renewable projects that will benefit us all.

Climate Justice Alliance is a member-led organization of 84 urban and rural frontline communities, organizations and support networks in the climate justice movement. We work to build real solutions to the climate crisis through building local, living, regenerative economies while pushing back against false promises from corporate controlled interests. 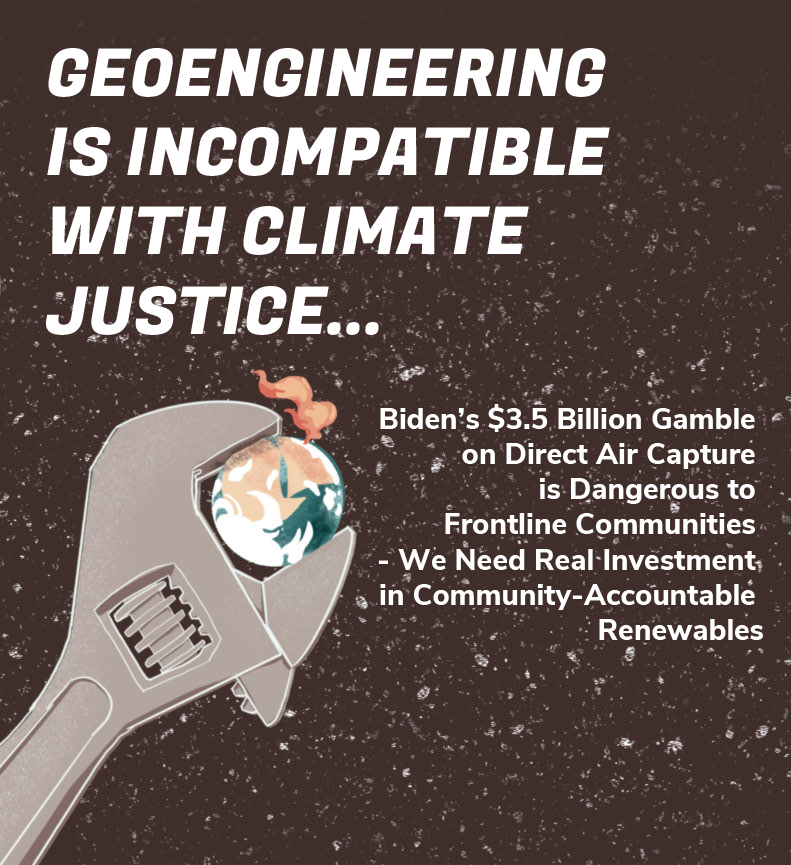