First Days on the Boat: Feature by Kiya, Uprose Delegate 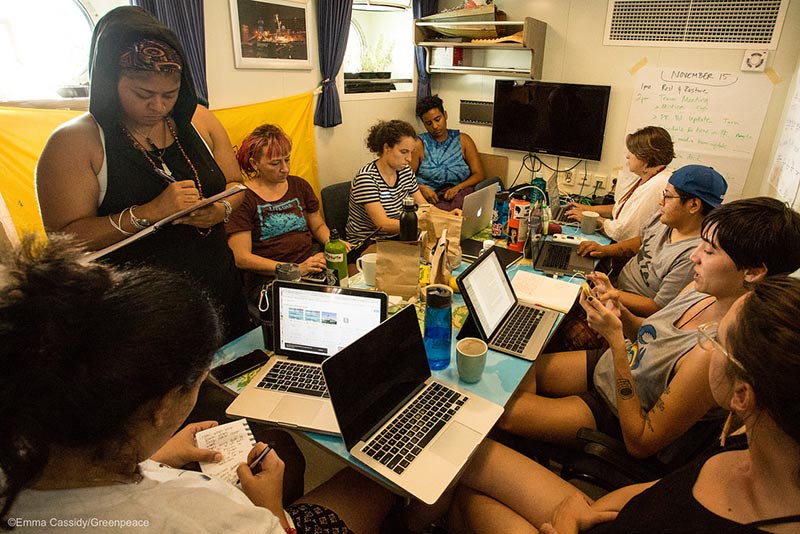 My name is Kiya Kiya Vega-Hutchens and I work for Uprose in Brooklyn, New York. Today was the brigade’s first full day on the boat as members of the crew. Yesterday we launched from Miami, and headed off into the big blue yonder, the ocean is crazy beautiful. I have been nervous about seasickness since there has been a lot of talk of horror stories mentioning 18 ft waves crossing the Atlantic. Although no complaints, so far we have been very lucky with the weather. For the most part the side effects have just been drowsiness, which have been amplified by the rocking of the ship which to me feels like a cradle!

Monica and I mopped the deck and alleyways today as part of participating in the morning chores. Everyone is normally up by 7 am latest and then we have breakfast mine was muesli and soy milk. The kitchen is such a treat because they have collected hippy food from all over the world, there are soy milks in every language, homemade hot sauces, and Scandinavian vegan cookies near the Indian pickles. It makes me smile. Most of the rooms have framed pictures from adventures that the ship has been on. This is the ship that the Russian Military boarded and arrested the Arctic 30.

After morning chores, I volunteered in the radio room – and will spend my downtime for the rest of the trip helping out there. My project today has been building a rechargeable battery for an emergency beacon in case the ship loses power. The technician, Mir, was breaking down tasks for me and I realized I was way over my head – but if not now then when? I am trying to just throw myself in as much things as possible during my short time here, and really grateful that he and the rest of the crew have been so inclusive of the brigade.

We spent the entire day coasting along the north side of Cuba. All day you could see it off in the distance – some times cityscapes and some times mountains. Since we were so close Mir was able to pick up radio stations from the island which made me feel connected to Cuba although we didn’t have the opportunity to stop and visit.

At 10 am, our brigade work begins. We meet in the campaign room, a narrow space in the lower poop deck. Finally, living in tiny apartments in New York City has translated to a useful skill. It prepared me for navigating these tight corners with tons of busy people.

Every day we plan to start the morning in our work groups – mine is social media and communications. In the afternoons we meet as a full brigade and cover updates for each work group, and end each evening with a training focused on the work that each of us is contributing towards a Just Recovery. It has been so meaningful to be working with all these brilliant and brave women and gender non-conforming people from around the country. I feel so lucky to be learning from their experiences.

Tara, who has spent the last decade working in Puerto Rico’s agro-ecology movement, lead a training for all of us about the work that she does and the agricultural systems in Puerto Rico, so that we will be able to confidently support Organizacion Boricua during our time on the island. Cuba is actually a model for a lot of the work that is being done on the ground. Agro-ecology is producing 50% of the food consumed in Cuba – as opposed to 2% in Puerto Rico. It is encouraging to keep in mind that the solutions to the climate crisis are here, and the models for a Just Recovery effort are right beside us.

Speaking of food -a quick note on lunch. It is so good! Willy, the chef is an exceptionally good cook. There are vegan options and vegetarian options galore, and you can taste the love and thoughtfulness that is put into the food that has been purchased and prepared by him.

During the evening, the crew goes on to the deck to watch the sunset. I joined some of the crew as they did pilates on the helipad, these folks are non-stop! In the middle of exercise, a pod of dolphins came to check out the commotion. I love how they like to surf on the waves that the boat makes which allows them to come really close. Since it was a young pod, they started to show off and jumping crazy highÂ when we cheered for themÂ !! They kept leaping higher and higher the more we cheered for them.