Frontline Communities Won’t Continue to Serve as Sacrifice Zones for Dirty Industry, Especially at the Hands of Democratic Leadership

Washington, D.C. – Biden’s recent statement to organize support for Manchin’s Dirty Deal signals that the Democratic President’s commitment to those hit first and worst by the climate crisis is fickle at best. Powerful grassroots community organizing from across the US and thousands of frontline communities beat back this dirty deal twice now within a span of 6 months. Throwing our communities under the bus to please a rogue Senator who is beholden to the oil and gas industry goes against every commitment the Democratic President has made to climate justice and even calls into question the intentions behind his Justice40 Initiative. We can’t let this stand.

With our nation’s most vulnerable communities’ rights being stripped away at every turn over the past few years, we won’t acquiesce to a further erosion of them at the hands of our supposed friends. With elections coming in another two years, Democrats can’t afford to either. Rather than going back on promises made to those who elected him just to help one lone Senator, now is the time to actually deliver to those communities who were courted on the campaign trail.

It’s simple: Manchin’s dirty “permitting reform” deal is no deal for environmental justice communities at all. Without the foundational protections afforded us under the National Environmental Policy Act (NEPA) and other bedrock protections like the Clean Water Act that ensure a pathway for community recourse against toxic and polluting industries, those on the frontlines of the climate crisis will be sacrificed again for the sake of big business and industry profits.

This move is unacceptable, and any attempt to dress this dirty deal up as green, clean, or beneficial to poor and working class communities is an outright lie and just another perversion of hallmark legislation that must be enhanced, not gutted.

“Strengthening the federal environmental review process and safeguarding benefits for communities, not future disparities is what’s in order. Giving a green light for more environmental and human degradation and destruction is unacceptable. With adequate community consultation and design involvement from the beginning, we know projects can move forward without delay, as recent studies have confirmed. Stripping this out would only further slow down the process, sanction harm and codify future harm for Black, Brown, Indigenous and other frontline communities.” according to Elizabeth Yeampierre, Executive Director at UPROSE & Co-Chair of Climate Justice Alliance.

“It appears that Democratic leadership would rather sacrifice our communities again, for short term political gain, rather than stay true to those who elected them by enacting real climate justice legislation. Let’s be clear, this is environmental racism and environmental injustice at its finest.” said Maria Lopez-Nuñez, Deputy Director of Advocacy and Organizing at Ironbound Community Corporation.

“By publicly undermining environmental justice communities to promote fast-tracked permitting in Senator Manchin’s dirty deal, President Biden has signaled that he supports profits of extractive industries over the human rights of the people. The White House needs to understand that the country’s climate goals will never be reached without meaningful engagement with Tribal Nations and Indigenous communities. We need Democratic leadership that is willing to say no to back-door deals and political games, and stand up for environmental and climate justice.” added Jordan Harmon, Policy Analyst and Legislative Advocate at Indigenous Environmental Network.

“After a ten year fight, here in Los Angeles we are celebrating a huge win with the STAND-L.A. coalition in getting the Los Angeles City Council to phase out oil drilling. Manchin’s dirty deal will take us in the wrong direction, worsening the climate crisis while the rest of the country is already phasing out and shutting down the fossil fuel industry and ensuring a Just Transition. Frontline communities are watching and will hold President Biden accountable if he breaks his promises, including supporting this dirty deal.” said Darryl Molina Sarmiento, Executive Director at Communities for a Better Environment.

“Black, Brown, and Indigenous communities should not be sacrifice zones for the fossil fuel industry and polluting corporations. It is outrageous to see that President Biden supports legislation that goes against every effort to dismantle environmental racism that his administration has committed to for the past two years. Senator Manchin’s dirty deal will fast track oil pipelines and toxic infrastructure in communities who are most impacted and overburdened by pollution all over the country. This administration’s continuous support of a bill full of fossil fuel projects and false solutions casts tremendous doubts on the effectiveness of its Justice40 program.” stated Juan Jhong-Chung, Climate Justice Director at Michigan Environmental Justice Coalition.

“Frontline environmental justice leaders have made it clear Manchin’s dirty energy deal would undercut bedrock environmental protections like NEPA, fast-track more dirty fossil fuel projects, and harm communities. Democratic leadership is throwing frontline communities under the bus to fulfill an undemocratic ‘gentleman’s agreement’ with Joe Manchin. This bill has actually gone from bad to worse in the Senate, and it is plain to see it is not about building renewable energy. President Biden is sticking his neck out for Manchin and the fossil fuel industry. If the President and Senators are really going to be leaders on environmental justice, they will stop this dirty energy deal.” said Adrien Salazar, Policy Director of Grassroots Global Justice Alliance.

Climate and environmental justice communities call on President Biden to stop this pandering once and for all and do the right thing. We also call on Senators to say no to this dirty side deal  and instead stand with those who elected you. We need to fast track a Just Transition, not a dirty one.

Climate Justice Alliance is a member-led organization of 89 urban and rural frontline communities, organizations and support networks in the climate justice movement. We work to build real solutions to the climate crisis through building local, living, regenerative economies while also organizing against the harmful practice of using frontline communities as sacrifice zones. 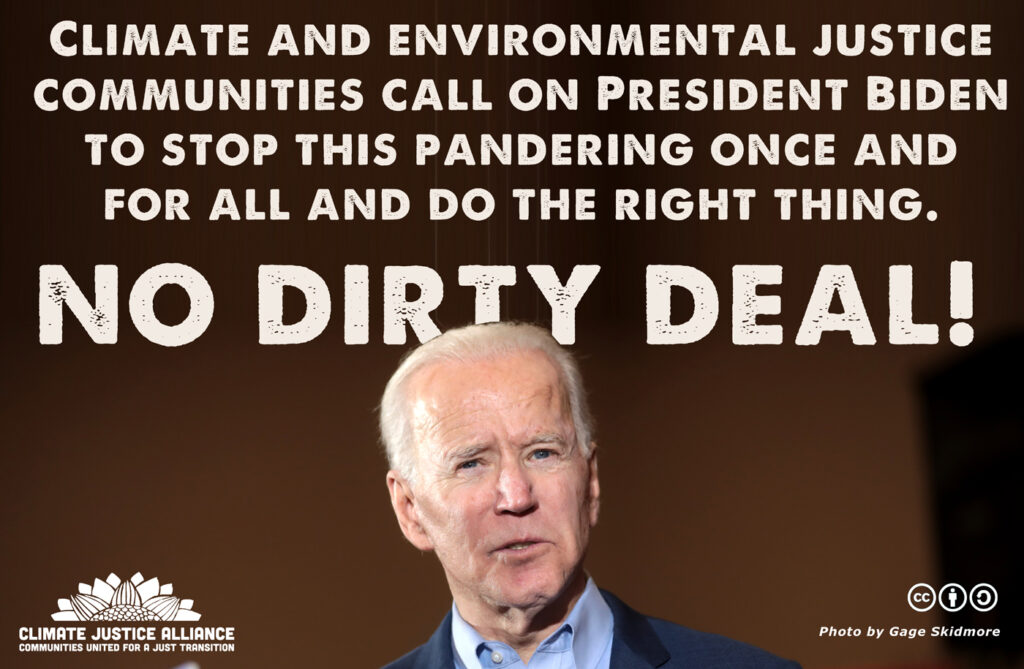