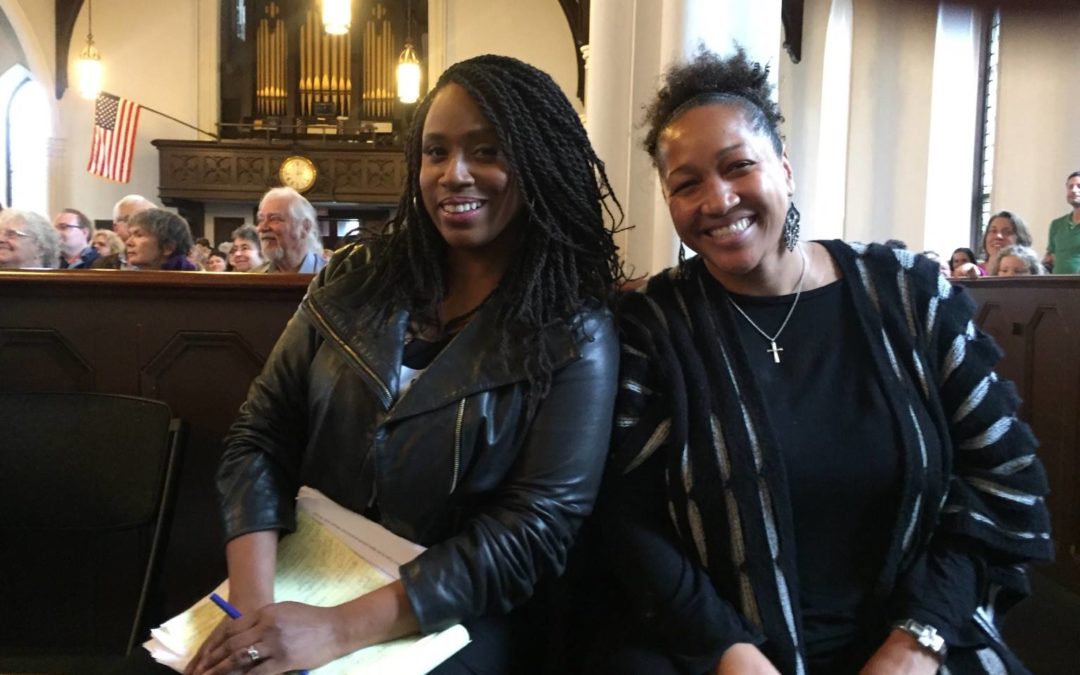 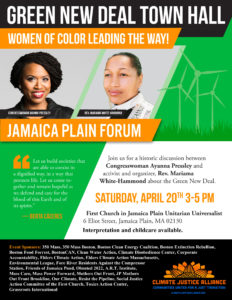 On Saturday, April 20, 2019, the Climate Justice Alliance partnered with Grassroots International, the Institute for Policy Studies (IPS) and its Jamaica Plain Forum for the first Frontline-Centered and Black-woman led Green New Deal discussion in Massachusetts. The event, which was attended by approximately 350 Boston-area community members, was headlined by a discussion with IPS’s Director of the Jamaica Plain Forum and Special Donor Assistant at the New England Office, Anny Martinez, who curated, moderated and produced the event, Representative Ayanna Pressley, the first Black Congresswoman in Massachusetts history, and Reverend Mariama White-Hammond, a local climate justice leader and Associate Minister for Ecological Justice at the Boston-based Bethel AME Church.

The goals of the Town Hall included increasing awareness of the history of the climate justice movement and the myriad contributions it has brought (and is bringing) to this Green New Deal moment we find ourselves in.  It also aimed to engender a discussion on the importance of local versions of the Green New Deal, similar to the Climate Mobilization Act, which was passed last week in New York City. Representative Pressley, for instance, stated, “We need states and cities to lean in more, this definitely needs to be a local process. We’re seeing this [the Green New Deal] on a local level from New York [City] to Boston right now. What we need to do to make this happen at the local level is organize like hell.”

A key theme evoked throughout the discussion was the need for a Green New Deal to include concerted equity goals. This point was compounded by a segment led by local frontline youth who shared some of these initiatives with the audience including a call for “Greater racial and economic equity,” that would “ensure disproportionate benefits of a Green New Deal would go to the working-class families and communities of color that have endured disproportionate economic and environmental hazards for decades.” Reverend Mariama elaborated on this point by sharing with participants a troubling history of the allocation of environmental benefits, like subsidies for solar, to majority white/affluent communities. She explained, “Massachusetts may be great on solar, but not in communities of color. All the subsidized solar is going to majority-white communities like Northampton and Wellesley – we need to talk about this and why communities of color can’t get subsidized solar.”

Before taking questions from the audience, both featured panelists agreed that addressing the climate crisis must operate through an intersectional lens because many of the existing oppressions, racial injustice, patriarchy and economic inequality, are inextricably linked to climate change. Reverend Mariama explained, “we have to talk about climate change in a way that we can also talk about mass incarceration – in a way that allows us to see the relationships between multiple struggles happening together.” Pressley added, “All of these things that are driving climate change are interconnected. That’s why we have to look through a lens of intersectionality and equity, or it won’t matter what we do.”

The major takeaway from this community forum was the need for more frontline leadership at the table for any Green New Deal process. Moving forward, it’s imperative that we build off of community-based, frontline-led victories at the local level, as well as years and decades of Indigenous/frontline wisdom that have brought us to this moment. The road to a Green New Deal was paved by the frontlines and must be traveled through a lens of Just Transition. This is what Climate Justice Alliance and its members mean by #LivingOurPower, and that’s exactly what was demonstrated on a lovely Spring day this past Saturday in Boston

We had the opportunity to sit down in discussion with Rev. Mariama following the event:

Note: CJA believes allowing for neoliberal constructs such as Net Zero emissions, which equate carbon emission offsets and technology investments with real emissions reductions at source, would only exacerbate existing pollution burdens on frontline communities. Such loopholes for carbon markets and unproven techno-fixes only serve to line the coffers of the polluting corporations, while increasing (not reducing) harm to our communities. We understand that our best chance for Just Transition would include a low energy transition that prioritizes real climate emission and co-pollutant reductions at source. It would center workers as well as, communities most impacted. This transition would not leave the door open for dirty energy like gas, nuclear, and incinerators for example to serve as bridge fuels or continue to dump, dig, burn up sacrifice zones often included in the definition of net zero goals.