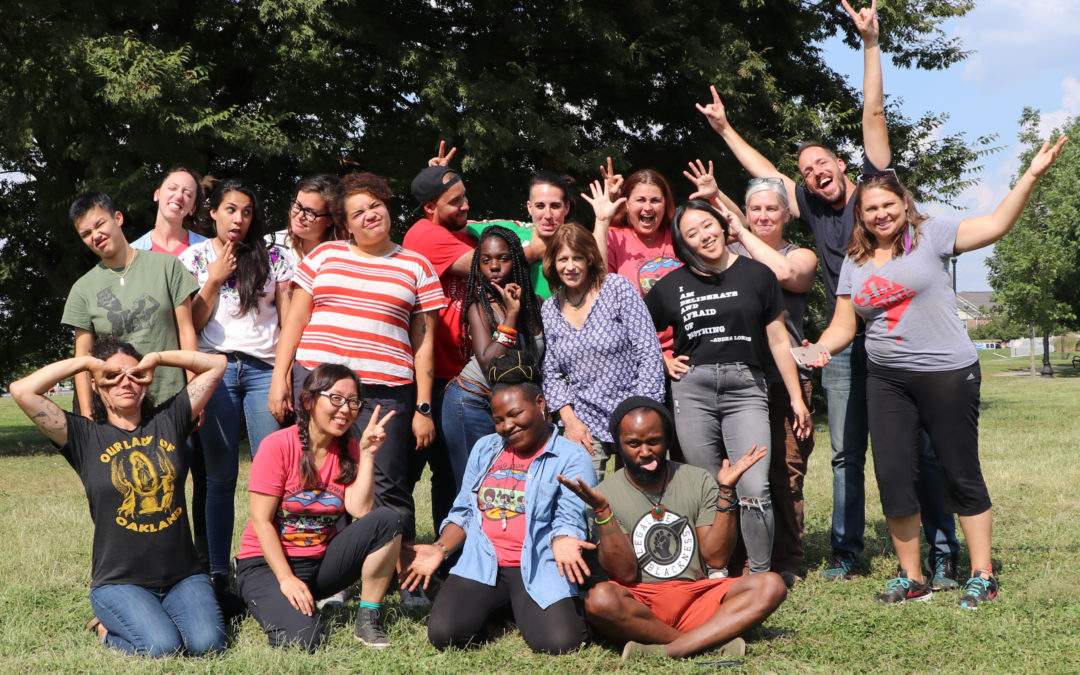 and why this work is a matter of self-transformation

“This is not what you were expecting, was it?” Angela, the executive director, asked me by the snack table, as we took a short break during the staff retreat in Indianapolis, hosted by CJA member the Kheprw Institute (which does awesome community work there, check them out).

It was my fourth day into my role as a communications fellow at the Climate Justice Alliance, and here I was, in an immersive full-week staff retreat meeting colleagues (and kindred spirits, as I would now describe them) who work together from home bases all across the country.

But it wasn’t a series of training modules and half-hearted icebreakers. It didn’t consist of presentations from “leadership,” for the most part. We were sitting in a circle, making eye contact, sharing out the real sacrifices made for the work, the real joys and burdens we each carry, the ways in which we are leaders, the struggle of living in a society not currently designed for us to actualize fulfilling lives, the challenge of imagining and BEING beyond the ways in which our economy currently works while still existing within the nonprofit industrial complex.

I felt like a voyeur, privy to an intimate space, to the gifts of vulnerable conversation and deep sharing, while trying to figure out what CJA even does exactly, as an alliance with 70 member organizations across the United States. Replicating this kind of sharing and vulnerable storytelling would be a key part of my role as a fellow, it turns out, as CJA moves more intentionally to express our members contributions and solutions to the climate crisis.

~*My Thought Process During the Retreat*~

What is climate justice? Why can’t I just say environmental justice?

Oh, the difference is actually significant and meaningful and comes with much history? I see…

What is “food sovereignty?” And “energy democracy?” And “regenerative economy?”

What’s a base building organization? What books should I be reading?

Will I understand enough by the time my placement as a fellow here ends, much less actually contribute to communications now?

What is a Just Transition? Does everyone, like the “general public” know what these terms and acronyms mean and have I just been really ignorant and privileged to not have heard of these frameworks for climate change mitigation?

Thus, with questions on top of questions, I had no idea which version of myself to bring to the circle — because I hadn’t even figured out whether I was worthy of being “in the movement.”

I’m entering a community of people who are passionate about how humanity harms each other through producing things that disrupt Earth’s balance and that spew toxic chemicals into the air (usually in neighborhoods of lower income folks at the expense of rich white folks with generational wealth power maintained through oppressive actions and laws since before the conception of what is known today as the United States). I would later learn these communities are referred to rightly as sacrifice zones.

I’m here with individuals who are considerate of all the living elements of Earth as a whole organism, who must feel the urgency deep in their bones every day, and who are living in their future visions while grounding it in the reality of today.

First of all, I still order sh-t on Amazon, with no better reason than out of convenience.

But more importantly, I should’ve been here the whole time. I should’ve paid more attention. I recycle. I use water bottles. I try to buy only things that I need (let’s be real, as a grad student living in the epicenter of gentrification, I can’t afford to be frivolous with spending). What makes me feel like I’m not “in it”?

And so the thoughts spiral.

…But this kind of immobilizing self-judgement and disempowerment is something we can’t afford in a time of climate crisis. I need to leave them behind.

The only thing I can bring are my own two hands, heart, and gut as well as the 27 years that came behind them. That has to be enough, because even the tenets of climate justice itself say that we are experts in our experiences and must use our unique ways of being to steward change: the Jemez Principles for Democratic Organizing, a foundational guiding set of guidelines for the climate justice movement says we must commit to self-transformation.

“You’ll meet people who self-grow all their food to those who only eat organic when it’s on sale at the grocery store,” Kari, also a CJA fellow (except with deeper roots in climate justice), told me. The most important thing, I discovered, is just the will to do something about the climate crisis, and the will to grow.

This version of me would have to be enough, because while I’m having this minor existential crisis in my head, I could be using all the existing pieces of me — my storyteller nature, my tendency to overthink, the sensitivity to beauty, the desire to give care, the nerd, the dancer, the child — to do what I can in making sure others like me realize the costs of tuning out the realities of climate change.

So to answer Angela’s question of whether I could have anticipated being in circle process, a heck of a way to get to know each other — the gist before the facts, getting to understand the how before knowing all the whats, the beautiful willingness to be vulnerable while recognizing true vulnerability is dangerous in any employment relationship in a state of capitalism, the answer is yes and no.

Yes, I have been genuinely lucky enough to work in spaces where I don’t have to check my values at the door, where we process and work through thorny questions about how to do our work and live responsibly.

But also no, I could not have anticipated that I was going to go salsa dancing with the E.D., my boss, and new colleagues a few days later, an act that felt like breathing, like my full self is at home here. (Now you know, I love to dance.)

Nor could I have anticipated just how many climate leaders made time to share their stories with me. Over the next five months, I’ll share with you what I’m learning about the work our members are doing in their local communities to move away from the oppressive and exploitative foundations that fuel climate change and inequality towards a society that centers human wellbeing over growth for growth’s sake. We call these solutions, broadly, Just Transitions.

Just Transition is a vision-led, unifying and place-based set of principles, processes, and practices that build economic and political power to shift from an extractive economy to a regenerative economy. This means approaching production and consumption cycles holistically and waste-free. The transition itself must be just and equitable; redressing past harms and creating new relationships of power for the future through reparations. If the process of transition is not just, the outcome will never be. Just Transition describes both where we are going and how we get there.

“What do we mean by Just Transition?”  — Climate Justice Alliance

Toward that end, I want to share these stories, sometimes through my eyes and sometimes directly through the thoughts and writings of our members, imperfectly and with your help, reactions, suggestions, thoughts, and feelings along the way. No matter how extensive your history with climate justice or whether you are an elder, a veteran, a movement leader, someone who’s been doing the work of Just Transition without the language, newly activated, or accidentally here, we all have room to grow.

I need you and your stories, we all do.

The world is kinda dire right now and 2020 has started (for me) with some reckless energy, but we can harness that potent new decade energy for the tectonic shifting we are doing together.

I want to share with you a poem (at the end) that I got to harvest from the potent new decade-new world energy of Climate Justice Alliance members at a storytelling training in December. It reminds me that we can lean into a love for our communities so ferocious, joyous, and cleansing that we will become willing to do the inner work of self-transformation.

Being in community and learning from our members has helped me to claim my organic power too: I can contribute and in fact, find myself every day more and more as a climate justice advocate in my own right.

And so I invite you to dance with me, wherever you are on this journey. If you have something to share, I invite you to share it. To question, to reflect, to act. To be brave, and a little scared. Just Transition takes practice. Embodying justice in a world where it is in short supply takes practice. Let’s practice until all the variations of Just Transition move in our memories like breath through our lungs.

So, over the course of the next few months, Climate Justice Alliance will be releasing stories from the frontlines of the Just Transition trenches right here!

If you want to be the first to know about our next story, sign up to receive regular updates in your inbox.

There Was Intentionality Here.
Let’s continue being present because that’s where learning is.
Cultivate your deep listening
I’m going to stretch myself —
A demonstration of our commitment to power and redefining it in our lives collectively

Steeped in information and experiences —
that’s visionary.
Our desired Future State of Being.

We took a walk during lunch to take knowledge with us.
It is dark outside,
— not enough healing and growing work
— can’t all be action
This is uplifting and that’s what I Am Going To Build.
We are all seed bombs, with the DNA and knowledge of our ancestors.

We learned to think short-term, but Look At Where We Are.
Together, we are powerful,
We’ve been dreaming of this.
I’m going to say it in my voice.

We don’t have a firm blueprint.
Statice flowers — they are always alive.
The energy of the youth at PODER are here.
I felt nourished.

I can literally feel the love —

It makes
me
feel
at home.