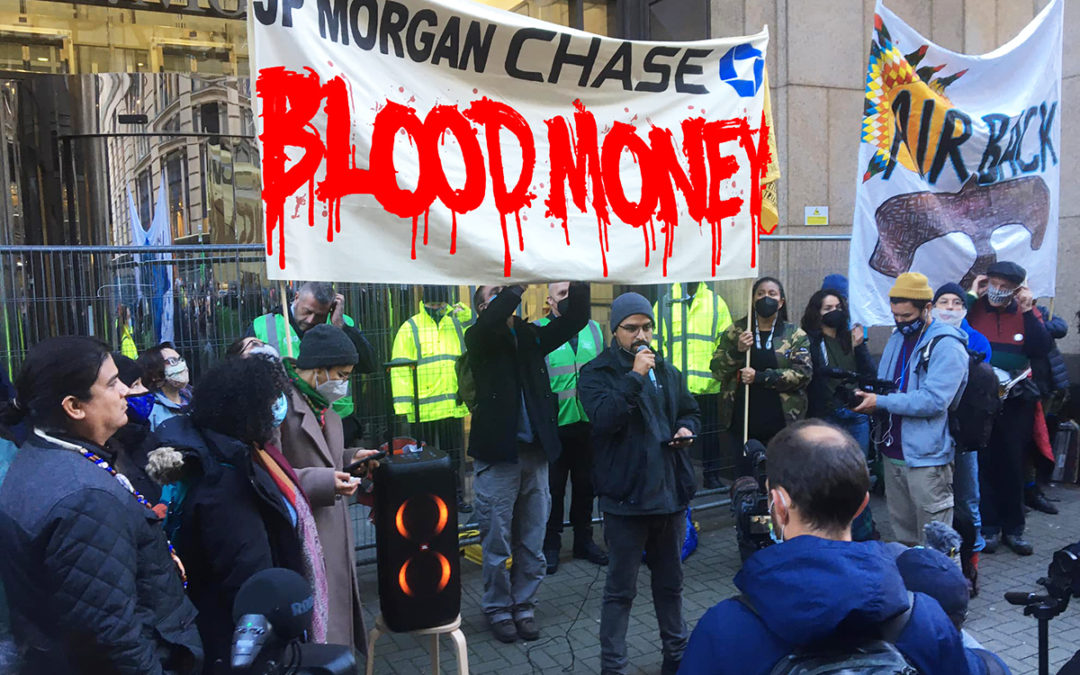 Since the signing of the Paris Accords in 2015, the world’s largest 60 banks have provided $3.8 trillion globally for fossil fuel extraction and related infrastructure, like pipelines. Of these financers, JP Morgan Chase is the worst with $316 billion in fossil fuel funding over the same time period.

“The time to divest from fossil fuels is long overdue.” says Eriel Deranger, Executive Director with Indigenous Climate Action. “This extractive economy is killing our communities and killing the planet. We can not have false solutions that allow fossil fuel extraction to continue. We must say NO to Net-Zero and demand that fossil fuels stay in the ground.”

“JPMorgan Chase, Wells Fargo, and many other banks claim to be investing in clean energy. At the same time they are deeply funding the fossil fuel industry.” says Ozawa Bineshi Albert, Co-Executive Director of Climate Justice Alliance. “It Takes Roots,” an alliance of alliances Climate Justice Alliance, Grassroots Global Justice, Indigenous Environmental Network, and Right to the City have taken the stance of our frontline communities. That the only way out of the climate crises is to divest from the fossil fuel industry and stop carbon emissions”

Last month, JPMorgan Chase joined the Net-Zero Banking alliance, a component of the Glasgow Financial Alliance for Net Zero (GFANZ). As part of its “net zero” commitments, JPMorgan Chase has pledged to reduce operational carbon intensity by 35% by 2030, and to reduce end-use carbon intensity by 15%.  Despite these commitments, Chase’s investments include some of the most destructive and polluting types of extraction such as tar sands, Arctic oil and gas, Amazon oil and gas, fracking, and coal mining. Much of the infrastructure funded by the bank, like Enbridge’s Line 3 pipeline and the Coastal Gaslink pipeline, is having direct impacts on the land and lives of Indigenous nations, and is being actively resisted by Indigenous peoples and impacted communities.

“Line 3 pipes are in ground, the dirty TarSands Oil will be filling them, we are not done fighting. We also stand with Line 5, we have to protect the Great Lakes. We cannot stop fighting at every level to protect our water and the sacred knowledge of the land.  We will prevail and hold Chase accountable because there is too much to lose” Grandma Mary Lyons, an Anishnaabe leader.

“We want to tell the world that the jungle, our home, is bleeding from the presence of extractive mining and oil companies that are destroying the only forests we have left.” emphasizes Nemo Andy Guíquita, Director of Women and Health for the Confederation of Indigenous Nationalities of the Ecuadorian Amazon (CONFENIAE).  “Today, as we are here, thousands of hectares are being cut down and our culture and identity is in danger. We want the banks and governments to understand once and for all the immense damage that they continue to cause to our peoples when they finance the trade of Amazon crude; today they have the opportunity to show the world that they are on the side of humanity’s survival, and finally stop the devastation of the planet.”

JPMorgan Chase is the largest banker for the fossil fuel industry worldwide, and the largest investor in oil and gas companies currently operating in the Amazon rainforest. It holds millions of dollars in bonds issued to PetroAmazonas, the oil exploration unit of Ecuador’s national oil company, PetroEcuador. PetroAmazonas is leading oil expansion in Yasuní National Park, a UNESCO Biosphere Reserve, where the process of building roads to access new oil drilling sites often triggers deforestation and brings drilling to the doorstep of Indigenous peoples living in voluntary isolation. The company is responsible for thousands of oil spills over the last decade. JP Morgan Chase is dragging its heels on implementing sound Environmental Social Risk (ESR) policies, including in the Amazon. It continues to fund Brazil’s national oil company, Petrobras, which is ranked one of the largest fossil fuel expansion companies globally. Despite active calls from Indigenous peoples in the Amazon for JP Morgan Chase and other banks to end financing for Amazon oil and gas, the world’s leading financier of fossil fuels has made no promises to end its involvement in oil and gas in the world’s largest rainforest.

“We, the original peoples, protect 80% of the world’s biodiversity.” explains Maricela Gualinga, Vice President of the Kichwa Sarayaku Peoples of the Ecuadorian Amazon. “We demand that banks immediately stop financing fossil fuels and ensure the life of all of humanity. We want to continue existing, and for the forest to continue living for the sake of the entire world.”