NATIONAL CALL TO ACTION FOR A JUST RECOVERY IN PUERTO RICO 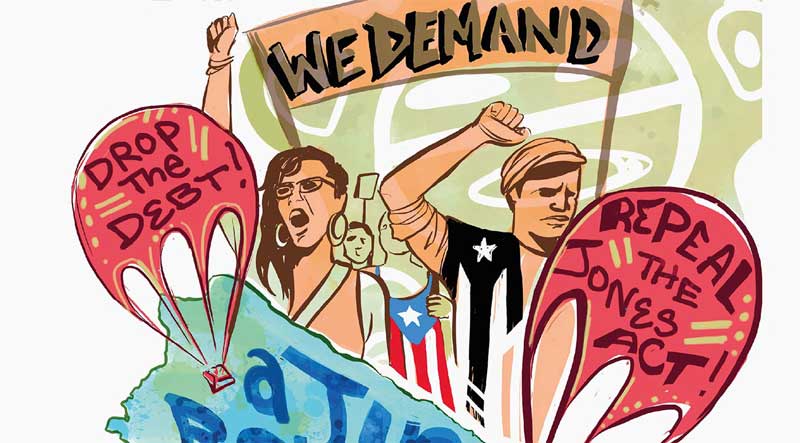 WASHINGTON, DC. – Today environmental justice advocates launched a new translocal campaign to push for a resilient recovery for Puerto Rico. The long-term goal is to provide Puerto Rico with resilient tools so its people don’t rebuild on pollution, debt, dependence, and crumbling infrastructure, but rather bounce forward to environmental justice, economic democracy, self-determination, and climate resilience.

The new campaign is led by Climate Justice Alliance and UPROSE joined by It Takes Roots, Grassroots Global Justice Alliance, LEAP and Grassroots International. Together they represent 30 states and 150 organizations across the US and Puerto Rico.

On Wednesday unified under the Our Power for Puerto Rico campaign, they demanded that Congress pass an immediate federal aid package designed for the Just Recovery and Resilient Rebuilding of Puerto Rico. A major kick off rally was held in New York where the largest number of Puerto Ricans reside outside the island.

Events throughout the nation also included the delivery of 5,000+ petitions to U.S. representatives in Washington DC. The petitions especifically demand a relief package that include debt relief, the repeal of the Jones Act, transparency in distribution of resources, an assessment of infrastructure.

The campaign has been collecting “resilient aid” to ship and distribute themselves on the island. Resilient Items include: Water filters, bikes with carts for transportation, work gloves, micro-green seeds and others that grow in this climate, solar-based radios, satellite phones, solar stoves, bike repair kits, solar flashlights, solar chargers, solar and wind energy.

“Wall Street’s business-as-usual approach to relief and recovery has led to land-grabs and riches off the misfortune of vulnerable communities. If we act with a clear vision for a Just Recovery, Puerto Rico can serve as a model for areas suffering the same climate injustice. Our representatives need to hear from us directly while on the Hill and back in their districts; we will not stop calling our reps until they include a Just Recovery in the federal aid package,” said Angela Adrar, Executive Director of CJA

“Puerto Rico today is a living, breathing, suffering symbol of climate injustice. The devastation left in the wake of Hurricane Maria is the culmination of centuries of colonialism, extraction, and repression. As Puerto Rico rebuilds, it must revolutionize the society’s decaying systems of survival by confronting the dominant political and financial institutions that have profited from this decay,” said Elizabeth Yeampierre, Executive Director of UPROSE and Steering Committee Co-Chair of Climate Justice Alliance.

“In my community in Miami, I witnessed first-hand what happens when people show up for each other during a climate crisis. Frontline communities across the Caribbean, the Gulf Coast and the U.S. South are responding to each other’s needs and bearing the brunt of the recovery with little to no resources. It’s a crime against humanity how the government has chosen to respond. This government owes Puerto Ricans full debt relief and a long-term investment in their survival,” said Cindy Wiesner, Executive Director of Grassroots Global Justice Alliance.

“The lives and livelihoods lost as a result of Hurricane Maria exacerbate injustices borne for centuries by frontline communities. We have an opportunity to respond in this time of human crisis with immediate relief and intentions for a long-term regenerative economic transformation. It’s imperative that frontline leadership determines the path for recovery that provides a just and sustainable future. We support the coordinated efforts of CJA as they center the needs of those most impacted and therefore with the greatest vision for what comes next,” said Sarah Shanley Hope, Executive Director of Solutions Project.

“Climate exacerbated storms like Hurricane Maria further elucidate the cycle of colonization that is afflicting the island and people of Puerto Rico. Systemic racism, bigotry and economic injustice are only a sample of variables that contributed to this humanitarian crisis. The people cannot afford an anemic recovery effort superficial in nature. These efforts must be led by the people in a way that benefits those who were impacted first and worst by a crisis they had little to do with creating. The Leap is honored to stand with the Climate Justice Alliance, Uprose Brooklyn and other groups who are leading the efforts for a people-powered recovery in Puerto Rico,” said Anthony Rogers-Wright, US Coordinator, The Leap.

“We as Puerto Ricans and people of color in the U.S.A. need to stand up in solidarity and work side-by-side with the people of Puerto Rico towards a Just Recovery and a sustainable, resilient rebuild that prioritizes autonomy, food sovereignty, climate and social justice, respect to the Mother Earth, and the human rights of all people in the Island. We need to take the lead of the courageous Boricuas organizing a regenerative people’s project on the ground with the goal of decolonizing Puerto Rico,” said Jovanna Garcia Soto, Solidarity Program Officer for Latin America at Grassroots International

“Thousands of families are still in desperate need of clothing, water, food, housing, and health care. Here from the U.S., communities are mobilizing to provide support and amplify the voices of our brothers and sisters in Puerto Rico. The solutions will come from them and it is imperative that we stand with the people of Puerto Rico to the rebuild their livelihoods and sovereignty,” said Saulo Araujo, WhyHunger

“The people of Puerto Rico require our full support: there can be no sacrifice zones. The time to step up is now. Our children and grandchildren will look back at this pivotal moment in history and judge us by the choices we made. Climate change is real. Transition has become inevitable. Justice however, is not. It is upon all of us to bring about a Just Recovery for the people of Puerto Rico; to make this a Just Transition for all,” said Mateo Nube, Movement Generation.

“Citizens of the wealthiest nation in the world are living in squalor and lives are threatened and lost daily as the situation persists. Circumstances are deteriorating with untreated illnesses and simple infections become fatal. The US government is duty-bound to address this crisis but long-term redevelopment must be by the people of Puerto Rico with locally elected officials empowered to reject the interests of the mono-focused wealth building agenda the government and corporations that have caused the island to a pay the price of catastrophic climate change impacts,” said Jacqui Patterson, DIrector, Environmental and Climate Justice Program, NAACP

“A just recovery has to start by taking responsibility for the double standard and colonial mentality of the United States towards Puerto Rico. Secondly, a just recovery must put those in harm’s way and those that have disproportionate impact first. Lastly, a just recovery is possible only if the grassroots people of Puerto Rico are the ones leading and holding the efforts accountable. A just transition for the people, by the people, with local economies, and sustainable production is needed,” said Jose Bravo – ED Just Transition Alliance

In the wake of Hurricane Maria and decades of environmental, structural and colonial racism, neoliberal austerity, and land-grabs by private equity funds and Wall Street banks, we must all stand with the people of Puerto Rico to support and fight for a long-term just recovery. A Just Recovery calls on us all defend the right and leadership of the people of Puerto Rico to self-determination, and to democratic control and autonomy over the resources, land, water, and food in Puerto Rico. We must fight against the attempts by Wall Street and government to further privatize and colonize the island for profit and exploitation. We stand arm-in-arm with the people of Puerto Rico and the Puerto Rican Diaspora across the globe leading the efforts for just, sovereign and sustainable Puerto Rico,” said Dawn Phillips, Executive Director Right To The City Alliance

The Just Recovery is a visionary framework promoted by the environmental justice and labor communities to transition and secure regenerative economies that can create jobs, protect the environment, and lead to resilient communities.