On Trump's Executive Order: Our Power is with the People - Climate Justice Alliance

On Trump’s Executive Order: Our Power is with the People 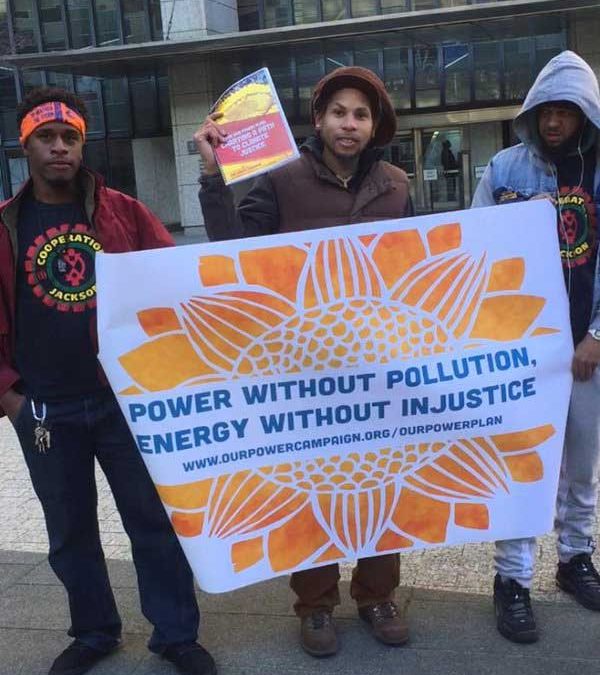 This week, Donald Trump issued an Executive Order (EO) that will gut the Clean Power Plan, an action that will increase U.S. emissions, push for coal leasing on federal land, and accelerate the climate catastrophe for those fighting for their lives in the most vulnerable communities of our country. Trump, Scott Pruitt, Rick Perry, Ryan Zinke and the rest of Trump’s reckless cabinet are stripping frontline communities of basic safety guards in order to shamelessly redirect money into a fossil fueled, militarized economy that will lead to our collective destruction on Mother Earth. This was clear from his cabinet picks, the Executive Order on the Dakota Access Pipeline, the budget proposal, and his approval of the Keystone XL Pipeline. This week’s Executive Order on the Clean Power Plan further confirms that he will stop at nothing short of our ruin in exchange for profits and corporate interests that have no place influencing decisions at the highest level of OUR government.

To be frank, CJA hasn’t always avidly applauded the Clean Power Plan and the Paris Agreement because of their limitations when it comes to Indigenous Rights, Human Rights, equity, mandatory reductions in environmental justice and frontline communities, amongst others. These tools favor techno-fixes and market-based solutions that often serve as deterrents to renewables and furthermore, reduce our climate crisis to a crisis of carbon rather than include the multiple cumulative effects of co-pollutants that harm community, worker health, and furthermore destroy our air and planet.

The Climate Justice Alliance (CJA) actively organized and put forth comments and recommendations to improve the CPP. Last year, we presented our own People-led Our Power Plan at every EPA regional office in the country. As part of the legal process, our communities would be better served if the feedback our members provided over the years was implemented to improve the Clean Power Plan and we will work very hard to ensure that the safeguards we have will not disappear. Trump’s proposed killing of the CPP leaves us exposed to profit-led manipulations that do not and will never protect and serve the people and is yet another significant and direct attack on low income folks, communities of color, women and children that are already fighting off the Muslim ban, ICE assaults, and violations to their human rights.

This year, major floods and droughts are once again predicted to hit down in the South, West and Coastal areas. To survive these attacks and build resiliency in light of mounting threats to our livelihoods; grassroots and frontline communities around the country are developing resistance hubs and working toward community regenerative solutions to the climate crisis. CJA is building broadly with communities who are building frontline leadership and influencing local, municipal, and state elected officials to take our power and energy back.

That is why CJA is building Beyond the Moment with Movement for Black Lives and other partners, Growing the Resistance with #ItTakesRoots and Mobilizing with the People’s Climate Movement. CJA communities are spearheading a Just Transition Movement organizing against extraction, “building the new” through cooperative businesses, partnering with groups to move money through reinvestment, and building the world we want to live in.

Our power is with the people and we will rise up to these challenges like our elders in the movement have done before us. As the administration continues to attack our communities, we will continue to fight for energy democracy and an economy that works for us. All of our survival depends on it.