Our New Year's Resolution and Last Chance to Donate in 2016! - Climate Justice Alliance

Our New Year’s Resolution and Last Chance to Donate in 2016!

This winter, our member organizations gathered to finalize a visionary Four-Year Strategy for their frontline communities to lead us through a Just Transition to an Our Power economy that is based on sustainable, resilient, and regenerative, not extractive, systems.

While the political terrain and some strategies have pivoted, CJA and our members are committed to the overarching goals of this Four Year Strategy explained here – New Year’s resolutions of a sort.

Will you help us stand resolutely in achieving these goals by donating today?

BUILD THE NEW: We must use our grassroots organizing power to build the next economy now; construct real models of that transition that can be shared, replicated, and innovated; and create economic institutions that build the political power of our members and organizations. These new economic institutions will be regenerative rather than extractive and rooted in ecological resilience and equity. In 2017, CJA is deepening relationships with workers and labor to envision an Infrastructure plan that really WORKS.

CHANGE THE RULES: Alternatives and models are not enough. We must change the rules to create new paths of least resistance that privilege the Our Power economy over the Old Power economy. This happens at all levels of governance beginning with the local. It is strengthened by demonstrating that we can create the new economy by flexing both economic and political power. We must identify the legal and structural barriers to the Our Power economy. We must break the rules that don’t work and write new rules to facilitate construction of the Just Transition economy.

MOVE THE MONEY: We will not resource a Just Transition from charity alone. We must organize to move money out of the Old Power economy using both public and private vehicles. We must weaken the power of the speculative markets, extreme energy, worker exploitation, extraction, and militarism while strengthening economic and political democracy to place power in the hands of the people. 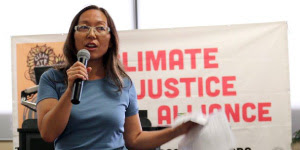 BUILD THE BIGGER WE: As CJA models multiracial alliance-building and successfully uplifts the work of communities of color, it can point a new direction for the grassroots climate movement as a broad, multi-sector, transformative front. Some of these goals are already rooted in strong, fertile soil and will flourish in 2017. For example, we held a “Build the Bigger We” in Washington DC after the election to ground a multi-sector and local, state, and regional approach to climate justice in the new year.

CHANGE THE STORY: We refuse to live in fear and allow the new administration to hide or undermine the environmental and climate justice struggle. We need to change the stories that normalize unjust power structures, make fundamental change imaginable, and build the expertise to narrate the changes already underway in order to shift the dominant culture and change structural power relationships. There is an opportunity to help allies in other movements see the climate crisis as a key driver of structural change in the 21st century and therefore a critical opening toward building a new economic system.

You can hold us to our 2017 (and all the way into 2020!) resolutions by making a donation today and joining the conversation on Facebook, Twitter, Vimeo, and Instagram as well as following the latest updates on our Blog.

Best Wishes for the New Year,

From all of us at Climate Justice Alliance