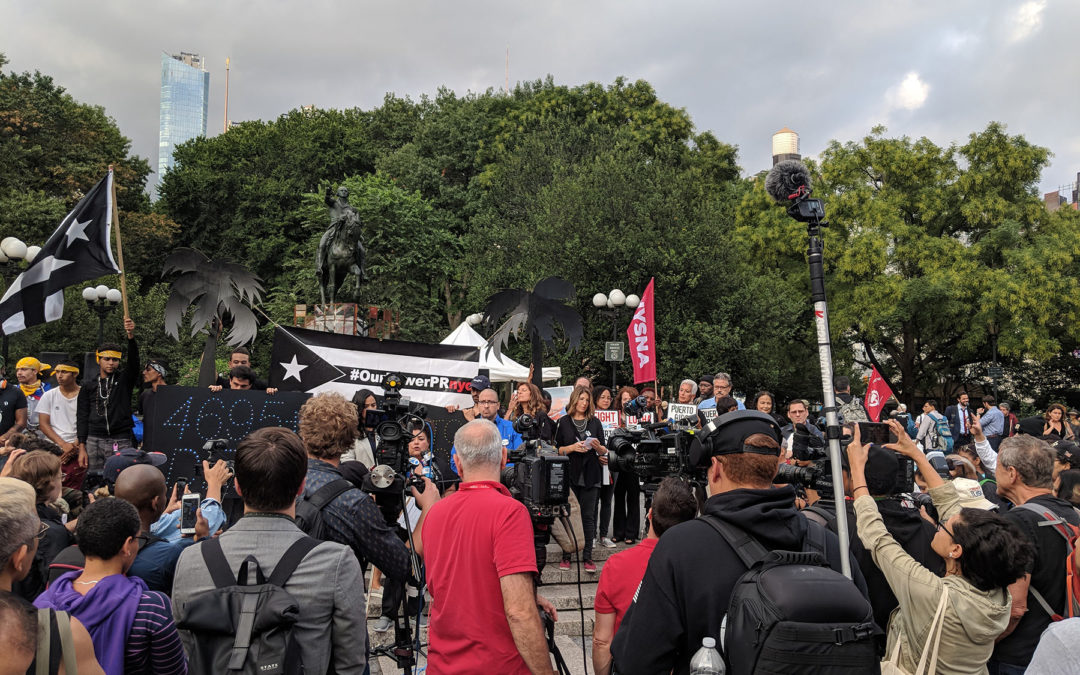 New York, NY – #OurPowerPRnyc today commemorated the one-year mark of Hurricane Maria slamming into Puerto Rico by bringing together in Union Square a large, diverse gathering of grassroots leaders, artists, activists and others from across the Puerto Rican diaspora to stand in solidarity with the many Puerto Ricans still struggling for survival and fighting to remain, reclaim and rebuild.

#OurPowerPRnyc is a grassroots initiative uniting the Puerto Rican diaspora around a shared platform to address the injustice in the US government response to the humanitarian crisis, demand self-determination and sovereignty, and ensure a just recovery to and transition to regenerative economy.

Elizabeth Yeampierre, Executive Director, UPROSE and co-founder of #OurPowerPRnyc, said, “Hurricane Maria landed on a legacy of austerity, neglect, and colonialism in Puerto Rico and opened the floodgates to those who prosper on the pain and loss of people of color — those responsible for climate change. Climate Justice is the resistance to a history of extraction of land and labor in the global south. We know this is a fight for our survival and we are ready.”

Angela Adrar, Executive Director, Climate Justice Alliance, said, “As we approach the one year anniversary of Hurricane Maria and the injection of disaster capitalist schemes to profit off the misery and destruction of millions, we are reminded that Just Recovery is about long term action, it’s not a quick fix. No shiny new development plans carved up behind closed doors will ever do; community rebuilding and control by those most affected on the ground is what is needed. With hurricane season upon us, we can’t wait another day. The people deserve the resources to rebuild in just and renewable ways; nothing short of this will do.”

Naomi Klein, author of The Shock Doctrine and The Battle For Paradise: Puerto Rico Takes on the Disaster Capitalists, said, “The disaster of Hurricane Maria is far from over. One year later the trauma and loss it left behind are still being exploited to close down public schools, sell off public utilities, shrink Puerto Rico’s population and siphon off desperately needed resources to service an unpayable debt. Today we are standing with dozens of Puerto Rican organizations who have said ‘no’ to this form of predatory disaster capitalism and are demanding a people-driven just recovery instead.”

Cindy Wiesner, National Coordinator, Grassroots Global Justice, said, “The devastation and neglect that we have seen in Puerto Rico in the wake of Hurricane Maria is a clear manifestation of American colonialism, racism, and corporate greed. Already, capitalist forces are exploiting this disaster to gentrify Puerto Rico and erode the self-determination of our Borinquen sisters and brothers. GGJ stands with them in saying NO to disaster capitalism and YES to a just recovery, led by communities on the ground, for Puerto Rico’s economic and political liberation.”

“A year after Hurricane Maria and as another hurricane season hammers parts of the southern United States and Asia, it is clear that the human-made effects of climate change are only going to get worse unless we implement a just transition off of fossil fuels,” said Greenpeace USA Executive Director Annie Leonard. “We stand in solidarity with the frontline communities that bear the brunt of the destruction imposed by climate change and fossil fuels. We should support and follow the example of those most affected by these problems, who are already implementing just and sustainable solutions in communities across the globe, as they lead our collective way to a clean and safe energy future.”

“A just recovery for Puerto Rico should be designed, led and will be best implemented by the good people of Puerto Rico,” said Leslie Fields, Director of Environmental Justice and Community Partnerships at Sierra Club. “They are US citizens and have suffered for too long by inaction and deliberate discrimination. The Sierra Club stands with its chapter in Puerto Rico and the amazing people of Puerto Rico to demand justice!”

Jovanna Garcia Soto, Grassroots International, said, “This hurricane further exposed the crime of U.S. colonialism and its imposition of a violent neoliberal agenda in Puerto Rico, and that is hard to take in. But there’s another side to the story, resistance! Movements and frontline communities are centering their work on self-determination, decolonization of minds, bodies and territories, and multiple sovereignties — energy, territorial and food sovereignty. We have seen the radical self-managed movements across the island working at the grassroots, based on the capacity and potential of communities to identify their own needs, organize their own reconstruction and build long-term collective resilience/resistance. And we have seen the protagonist political role that grassroots feminism has to push this transformational vision. This brings me hope!

“I’m going to the #OurPRPowerNYC Hurricane Maria Memorial Rally because on the one-year anniversary of the storm, now more than ever we need to be connecting with our elders and activists in the movement for environmental justice, and justice for Puerto Rico. And the only way we do that is by gathering in person to bear witness to the work that is being done, and listen and engage in discussion about the path forward,” said Alexandria Ocasio-Cortez, Congressional candidate (NY-14).

New York State Senator Gustavo Rivera said, “It’s been a year since Hurricane Maria ravaged my beloved Puerto Rico, and the devastation and pain are still palpable on the island and among the diaspora. During the two trips I have made to the island since Maria, I witnessed firsthand two of the main realities surrounding the aftermath to this tragedy. First, the towering resilience of the Puerto Rican people, which has produced a grassroots recovery movement that is consistently making slow but important progress in rebuilding the island. Second, the shameful, unaccountable and borderline criminal response of a federal and central government that left the 3 million Puerto Ricans on the island to fend for themselves. Today, I am honored to join many of our City’s leaders to mourn the lives lost as a result of this unprecedented natural disaster, and to renew our commitment to continue directing all of our efforts to help rebuild Puerto Rico for Puerto Ricans, while providing the necessary resources and services to those who’ve been exiled in the mainland United States.”

“What has already been a year must surely feel like an eternity for Puerto Ricans affected by Hurricane Maria and that were since abandoned by our federal government,” said New York City Councilwoman Carlina Rivera. “Those who remain on the island and the climate refugees who have sought relief and opportunity on the mainland U.S. deserve more from leadership in Washington who have not given them much thought in the last 12 months. It is inspiring to see people come to their aid with community leaders and organizations stepping up to help our brothers and sisters here and in Puerto Rico. All of us who have organized, rallied, and coordinated relief efforts have turned our anger and resentment into a movement that demands more resources for recovery while looking towards avenues of greater self-determination for the island. In addition to the thousands lost that we honor today, we recognize the resilient survivors who work every day to rebuild and resist.”

Eddie Bautista, Executive Director, New York City Environmental Justice Alliance, said, “From Superstorm Sandy to Hurricane Maria and all around the world, the most economically, socially vulnerable individuals and communities are on the frontlines of climate change and its cruel devastation, but we are also the ones showing the way to a Just Recovery that empowers our communities, instead of the economic interests that fueled the firestorm of climate change.”

Judy Sheridan-González, RN, participant in multiple disaster relief brigades in Puerto Rico and President of New York State Nurses Association (NYSNA), said, “Our medical teams saw, with our own eyes, clear evidence of absolutely preventable death and disease — in overwhelming numbers — after the hurricane hit. The cruel austerity provisions imposed by the Wall Street-controlled Fiscal Junta rendered the entire infrastructure of the island incapable of managing any disaster, let alone this Climate Change-induced super-storm. The extraordinary neglect — and denial — exhibited by the US Government post-María was not only immoral, it was criminal.”

Jesús Vázquez, National Coordinator, Organización Boricuá de Agricultura Ecológica de Puerto Rico, said, “It’s almost a year now since Hurricanes Irma and Maria impacted our landscape and our communities that to this day are still recuperating. On top of that local and federal US government have responded slowly with corporate driven false solutions. We were already in a crisis reflected on a debt provoked by bad and corrupt administration of governments. Event though our people demand the debt to be audited, our government refuses to do so, the same way they irresponsibly denied the more than 3,000 deaths related to the impacts of last year’s climate events. Nevertheless, while all of this keeps happening frontline communities and grassroots organizations led by Puerto Ricans are exercising their sovereignty on the ground working non-stop doing the just recovery Puerto Rico needs for this current times and for the long run that Puerto Rico deserves.”

Juan Cartagena, President and General Counsel, Latino Justice Project, said, “There is a lot more work to do in our community to get them to connect the dots between the growing voter suppression movement and emerging Latinx political power.”

Rosa Clemente, Puerto Rico on the Map, said, “We must hold those in power accountable for their crimes against humanity against the people of Puerto Rico. We must support Puerto Rican organizations on the ground. We must fight for decolonization and the cancellation of the illegal debt.”

Roberto Borrero, International Indian Treaty Council, said, “Caribbean political leaders would do well to join Indigenous peoples in advocating for systemic change that responds to both the environmental crisis and long-standing calls for social justice.”

Matt Nelson, Executive Director of Presente.org, the nation’s largest online Latinx organizing group, said, “The damage to homes, lives, and communities from Hurricane Maria continue to mount in Puerto Rico one year later; and it shouldn’t take thousands killed to compel us to tackle this crisis. Let’s honor all of Puerto Rico’s residents by doing everything in our power to bring a just and full recovery. We have opportunities to right these wrongs and to hold decision-makers accountable for their government negligence and corporate abuses.”

#OurPowerPRnyc is a community-led initiative of the Puerto Rican diaspora guided by the Jemez Principles of Democratic Organizing. To find out more or join the campaign, please visit www.uprose.org or email info@uprose.org.