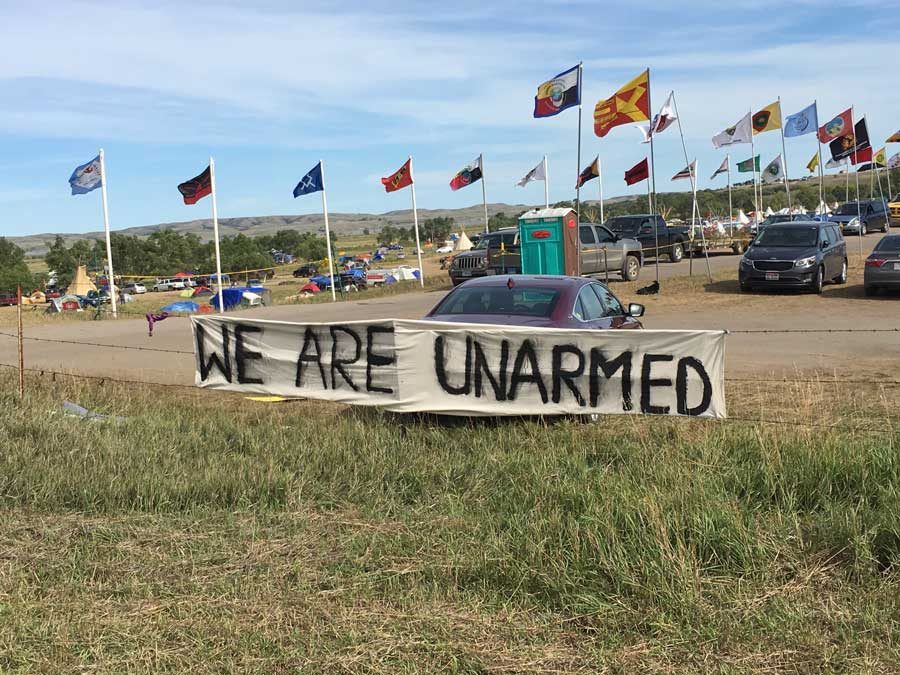 I recently had the opportunity to travel to North Dakota and visit Sacred Stone camp as part of The Climate Justice Alliance’s delegation to support our partners at the Indigenous Environmental Network. My experience affirmed my belief in how critical this fight is, and how important the communities directly impacted by projects like Dakota Access are in leading us towards a Just Transition.

There are many reasons why the Dakota Access pipeline is a bad project, not just for the Indigenous people who live on the land around it, but for everyone. It takes away the right for people to govern their own energy, it poisons precious resources and perpetuates the biggest crisis of our existence — climate change.Few people today have control over the energy we consume. Large corporations and government officials make decisions about our energy that deeply impact communities they have no grounding in. The Dakota Access pipeline is a key example of this – it was approved with no consent from the Standing Rock Sioux tribe, and even runs through sacred burial sites and precious sources of drinking water.

Not only does the pipeline take away rights to self-determination of energy, land and water, it will further contribute to our current climate crisis. Temperatures are continuing to rise and are causing more and more global warming-related disasters everywhere, from the flooding in Louisiana to the fires in California and to the heat waves in the northeast. I, like everyone else, have a stake in supporting communities who are standing up to projects like Dakota Access. We don’t need more pipelines, we need a just transition to clean, sustainable, and democratically-controlled energy.

This is also a clear battle against environmental racism. The Dakota Access pipeline was deliberately rerouted from the whiter, wealthier community of Bismarck to instead pass through tribal land. It is a statement that people who aren’t white and wealthy are somehow worth less, and that our public officials are happy to turn the other way for the sake of corporate profit.

Another reason I wanted to go to the camp was because of the narrative I’d heard from mainstream media and public officials. The people who live off the land and water ranging from the Bakken oil fields to Illinois and beyond are protecting their resources from being poisoned by Dakota Access. Pipelines leak – it’s not a matter of if, but when. Everyone who depends on water to live should be invested in this fight.

Despite the obvious threat from this pipeline, I’d watched the media deem the people protecting their resources as violent. There was no consideration that building a toxic and undemocratic project that threatens the livelihoods of countless people is the real act of violence. Those who will be impacted by this pipeline have a right to their culture, resources and ways of life, and also have a right to protect them. After feeling frustrated by the ongoing coverage, I wanted to see for myself what was going on in North Dakota.

Peaceful Co-existence and ResistanceMy visit to Standing Rock affirmed my belief in all of the reasons why Dakota Access needs to be stopped. What I had not heard about before getting to the camp was how it embraced the practices we should be pursuing. Not only are the Standing Rock Sioux tribe and other Indigenous people fighting for the well-being of the environment and those that live in it, they are demonstrating what it could mean to live in a world that is sustainable, regenerative, and that values the people and cultures in it.I hadn’t thought about it that way until I sat beside the river and watched Carla Perez from Movement Generation reflect on what we had seen at the camp. People living there contribute to its daily operations, such as cooking and cleaning, in a fairly decentralized and cooperative way. There have been great efforts to make the camp as clean and sustainable as possible. Campers use minimum amounts of energy and are composting and recycling to reduce waste..Campers emphasized over and over again the importance of their water, and talked about the desecration of sacred and cultural sites by Dakota Access. I didn’t see any acts of violence at the action in Bismarck or at the camp, though we did have to pass through a barricade with armed guards to get to and from the camp.

Just as important and impressive are the people working to repair the less material harm that has been inflicted by years of colonialism. We had the opportunity to speak with a teacher named Lee who talked about how they have created a school for youth that uses alternative educational techniques to teach students about Indigenous knowledge. They employ circle (or regenerative) reconciliation when there is conflict. Educators are teaching students about ways of life beyond the capitalist, unsustainable norm that we are frequently taught, while attempting to heal the generational trauma that has been inflicted on the students and their families.

Despite oppression, limited resources, and a tremendous amount of growth in a short period of time, Indigenous people have managed to create an organized, efficient, and functional community at Sacred Stone.

Struggle Ahead, Struggle Together

Of course the camp isn’t completely sustainable. It can’t be in a dominant economy that does nothing but extract labor, culture, and resources. That would take investment in the people of Sacred Stone camp and other frontline communities. It would take reparations that would go towards healing the violence and loss caused by white supremacy, capitalism and imperialism, representing a true Energy Democracy. It would take stopping not just this pipeline, but all extractive energy projects. It would take people willing to not only listen, but also follow the lead of frontline communities in a very difficult social, economic and political transition. But it’s what needs to happen if we are going to defeat the crises that face us today.

CJA stands with Our Power, Standing Rock Sioux tribe, Indigenous Rights, and a Just Transition. Here are some of the next steps we are taking to support the fight against Dakota Access: