Women of Color Lead: A Call to Grow the Resistance against Trump, to Converge in Washington D.C. Jan 18-21 - Climate Justice Alliance

Women of Color Lead: A Call to Grow the Resistance against Trump, to Converge in Washington D.C. Jan 18-21 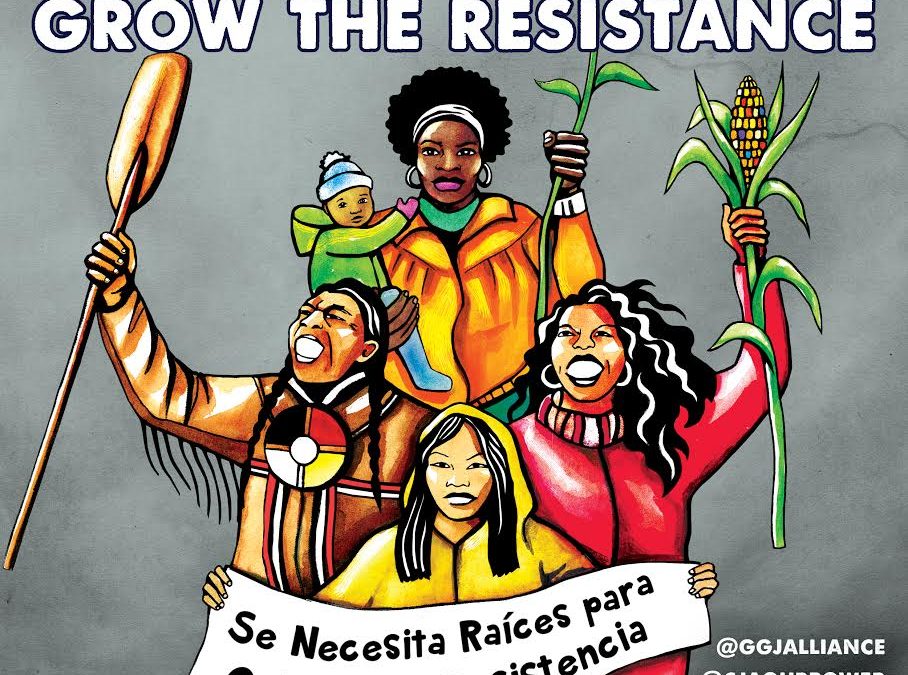 Women of Color Lead: A Call to Grow the Resistance against Trump, to Converge in Washington D.C. Jan 18-21
Interviews available upon request with women of color, undocumented & immigrant women, Spanish speakers, Indigenous Peoples, youth and renters

Washington D.C. | January 18, 2017 ”This week, women of color and grassroots leaders from around the U.S. will join forces for the “It Takes Roots to Grow the Resistance” delegation to Washington D.C. to take action against the incoming Trump administration. The delegation, organized by the Climate Justice Alliance, Grassroots Global Justice Alliance, the Indigenous Environmental Network and the Right to the City Alliance, will bring together over 100 grassroots leaders from communities most impacted by a wide range of the incoming administration’s proposed policies.

These leaders “from African American, Latino, Asian, Pacific Islander, Indigenous, and poor white communities across the country“ are joining together to resist the threat posed by the incoming administration and to build a vision beyond hate and walls.

“We are in a moment in which racial hatred against our communities of color is stronger than ever, in which we have to organize, unite and defend our rights that we have as immigrants, workers and families. We cannot allow fear to paralyze us. The respect and dignity of and in our communities is our shield to be able to maintain that strength and resistance in our communities.” Sylvia Lopez, Domestic Workers organizer, Mujeres Unidas y Activas.

These grassroots leaders will join together in workshops to learn from each other’s local struggles and victories and to be trained in community resilience and nonviolent resistance. They will also take part in the direct actions listed below.

“It Takes Roots to Grow The Resistance means that grassroots communities hold the power to pushback against the injustice that a Trump presidency will bring. Grassroots, local, low-income and communities of color are leading the way with solutions right now, such as United Workers shutting down incinerators in Baltimore and the Boston Recycling Coalition pushing their city toward zero waste.“ Ahmina Maxey, Global Alliance for Incinerator Alternatives (GAIA)

“When people in power have tried to divide our communities, told us to hate and fear each other, it is the women who have brought us together. Now more than ever, we need to ensure that the roots of the resistance are strong, so we are coming together to grow and deepen the resistance together.” Angela Adrar, Climate Justice Alliance

Local Actions Throughout the Nation:

On January 20th, in solidarity with the delegation in D.C., member organizations are spearheading actions in nine cities across the country including: Chicago, Oakland, San Francisco, Nashville, Los Angeles, Boston, San Antonio, Long Beach and Denver. The #ItTakesRoots coalition also plans to escalate a series of translocal actions throughout the first 100 days of the Trump Presidency to build community power.

It Takes Roots to Grow the Resistance

Grassroots Global Justice is a national alliance of grassroots organizations building a popular movement for peace, democracy and a sustainable world. GGJ weaves and bridges together US-based grassroots organizing groups and global social movements working for climate justice, an end to war, and to advance a just transition to a new economy that is better for people and the planet.

The Climate Justice Alliance is a collaborative of over 35 community-based and movement support organizations uniting frontline communities to forge a scalable, and socio-economically just transition away from unsustainable energy towards local living economies to address the root causes of climate change. We are rooted in Indigenous, African American, Latino, Asian Pacific Islander, and working-class white communities throughout the U.S. We are applying the power of deep grassroots organizing to win local, regional, statewide, and national shifts.

Right to the City Alliance (RTTC)

Right to the City (RTTC) emerged in 2007 as a unified response to gentrification and a call to halt the displacement of low-income people, people of color, marginalized LGBTQ communities, and youths of color from their historic urban neighborhoods. We are a national alliance of racial, economic and environmental justice organizations.

Established in 1990 within the United States, IEN was formed by grassroots Indigenous peoples and individuals to address environmental and economic justice issues (EJ). IEN’s activities include building the capacity of Indigenous communities and tribal governments to develop mechanisms to protect our sacred sites, land, water, air, natural resources, health of both our people and all living things, and to build economically sustainable communities.